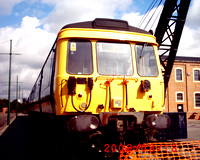 In 1967, the Inverclyde lines (Glasgow Central - Gourock and Wemyss Bay) were electrified and there was a need for a further batch of Electric Multiple Units to operate the lines.   19 Class 311 (then called AM11) EMU's were built.   Pressed Steel, who had built the Class 303's just a few years earlier had closed down therfore the Class 311's were built by Cravens. 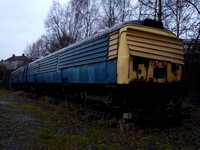 The class 311's looked almost identical to the class 303's and had seating for 236 people, however there were a few differences.   Firstly the 311's were built to only run at 25Kv AC, where as the Class 303's were built as dual voltage sets.   There was additional vents on the side of the Class 311's Motor coaches next to the Guard's Compartment and internally the decor was more modern than that of the class 303 and each unit was fitted with Flourescent lighting from the start, rather than the Tungsten Lighting fitted to the class 303. 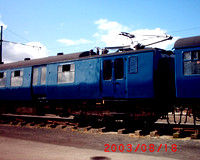 The 311's started life on the Inverclyde lines, however after developments in the Overhead Line technology, that allowed the 6.25KV sections of wiring to be upgraded to 25KV and the use of dual voltage areas to be abolished, the 311's found their way onto other lines including the Cathcart Circle, Hamilton Circle, Lanark services and North Clyde lines as the 303's and 311's could work in multiple with each other.

There were plans to upgrade the class 311 for the electrification of the lines to Ayrshire, however it was found to be cheaper in the long run to get newer stock built (class 318s) therfore the 311s were not refurbished in 1984 when 50 of the class 303s were refurbished and remained in their original condition with the exception of the flat toughened windscreens replacing the curved glass and 3 of the units were painted into orange and black Strathclyde Transport colours. Also the units had no gangways between vehicles. 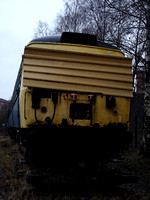 311104 was scrapped at Immingham in 2002 whilst 311103 was preserved in 2002 and found its way to Summerlee Heritage Park in Coatbridge, where it was repainted into a coat of BR Blue.   However in 2006 when the park was being refurbished, the set was moved from its prominent position in front of the main building to an area round at the back at the furthest point away from the entrance.   Driving trailer 76414 was sold to VSOE who wanted the Bogies for underneath one of their pullman carriges, whilst the remainder of the vehicle was scrapped.   The 2 remaining vehicles had their windows covered with corrugated cladding to protect their windows from vandalism.    Both vehicles remain in the same location today looking forlorn.