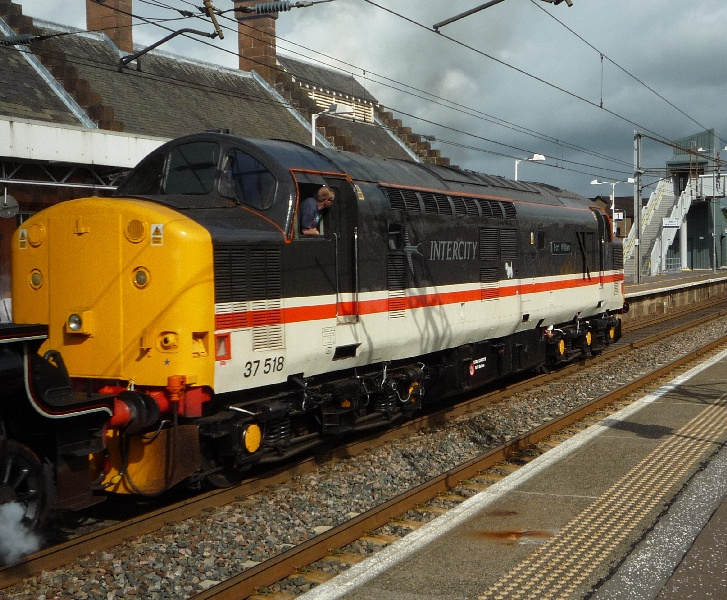 Between the late 1950’s and the early 1960’s, 309 of the English Electric Class 37 diesel locomotive were built.   Over 50 years later in 2012 and a number of the fleet are still in service both on the main line and in preservation.

As part of the British Railways Modernisation plan, and the need to eventually eradicate steam traction, a new batch of mixed traffic locomotive capable of hauling both passenger and freight trains was needed.   This new locomotive required an engine capable of producing 1,500 hp (1,100 kW) to 1,999 hp (1,491 kW) of power.

Initially to be classed as Type 3, the order for 309 class 37’s were split between English Electric's Vulcan Foundry at Newton-le-Willows, and Robert Stephenson and Hawthorns of Darlington, originally numbered in the range D6700-D6999 and D6600-D6608.

The Class 37's were based at depots all over the country however were mostly found in Scotland, Wales and East Anglia at first before popping up all over the place.

By the 1980's, a number of Class 37's had been modified and refurbished and were split into subclasses depending on the modifications undertaken, the subclasses were

All 309 locomotives were originally classes as 37 / 0 when built, some remained as in this subclass for their entire working life.   There was a number of differences between the class 37's.    The most visible difference was that the first 119 37's built had a split headcode box showing the TOPS number for the train.   The remainder had a single headcode box, and horns mounted on the roof rather than on the nose of the locomotive.    Throughout the 1980's a number of 37/0's were based at Inverness and Eastfield depots to operate the Far North and West Highland Lines respectively whilst Motherwell had a number allocated for freight duties especially those operating out of Ravenscraig.   The 37/0's had water tanks for steam heating coaches on passenger duties.

The Class 37 /3's received new bogies but did not receive further refurbishment other than having their steam heating tanks converted to carry extra fuel.

The class 37/4's were refurbished and rewired with their English Electric Generator being replaced with a Brush Altenator and Electric Train Heating capability installed.   31 examples were created with 25 based in Scotland at Eastfield, Inverness and later Motherwell depot, with the remaining 6 being based in Wales.

12 Class 37/ 6's were created to haul overnight Nightstar trains as part of Eurostar services over non electrified lines around Britain.   They never made it into service for this purpose as the project was abandoned, with the 12 37/6's being stored.   DRS bought all 12 locos and were until recently all still in service with DRS.

This subclass was created for hauling heavy freight and were mostly based around South Wales.   They were identical to the 37/ 5's except they were fitted with extra ballast to give extra pulling power.   A number of this class were transferred to Europe where some are still used on Engineering Trains.   Only 1 class 37/7 remains in service today (37706 with West coast)

Similar to the Class 37/ 7's this subclass was used for hauling heavy freight, this small class of 6 were used for testing a new Mirlees engine and Brush Altenator.   The 37/9's were introduced in 1986 and were withdrawn as non standard in 2000.

Under British Rail ownership, the 37's found use on passenger and freight workings but passenger use plummeted following the introduction of DMU's to a number of lines.   The final normal 37 turn in Scotland was the West Highland Sleeper, which was operated by the Electric Train Heating fitted class 37/4's operated by EWS, these were replaced by Class 67's in 2006.

In the early 2000's DRS bought a number of 37's which had been withdrawn by EWS and 12 37/6's that were sold by Eurostar.   They currently own a number of 37/0's, 37/4's, 37/5's and 37/6's.    Their most recent accusitions being 14 37/4's which had been sold by EWS/ DBS.   The DRS 37's work a number of freight and charter services including nuclear flask trains, RHTT trains, Scrap trains, Snowplough duties, Charter trains, intermodal trains and from 2015 also operate some passenger services in Norfolk and on the Cumbrian Coast between Carlisle and Preston.

West Coast have a number of 37's although most are used as a source of spare parts.   They are used on charters, stock movements and for backup / rescue for steam charters.