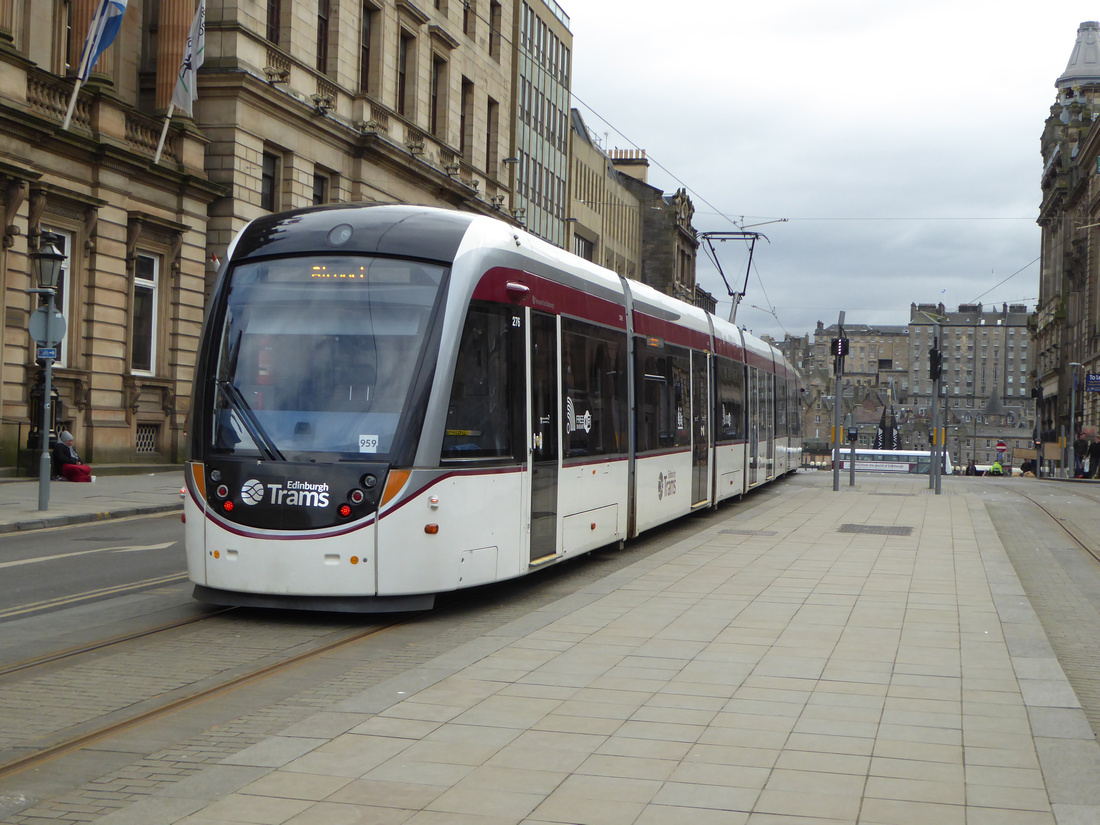 The Edinburgh Tramway currently consists of a single 8.7 mile route from Edinburgh Airport on the western outskirts of the City to York Place in the City Centre.    The route was initially intended to continue on to Newhaven, near Leith on the shoreline of the River Forth, however the route was cut back to York Place due to a funding crisis.

Initially, there were plans for a branch from West of Haymarket to Granton that would mostly have been on the alignment of a former railway line, and would eventually be joined up with the original line at Newhaven, creating a circular route and also for a branch from the Airport line at Ingliston heading to Newbridge, both lines have been cancelled but may be revived in the future.

The opening of the truncated tramway was much delayed having been due to open in February 2011, however the line eventually opened on 31st May 2014, over 3 years late and massively over budget.

The first tram arrived in Edinburgh during 2010.   Tram 252 was displayed on Princes Street at the newly built Princes Street tram stop throughout Summer 2010 and was later displayed at Leith.

On 12th December, tram 277 became the first tram to move under it's own power and outwith the confines of the newly completed depot with a test run from Gogar Depot to the Airport.   Moving on to December 2013 and with construction work completed, more regular testing commenced initially between Edinburgh Airport and Edinburgh Park.   History was made overnight between 4th/5th December 2013 when    Tram 264 would become the first tram to run under it's own power in the city centre since the closure of the 1st Generation tramway in 1956 when it reached York Place. On 18th December 2013 tram 265 also reached York Place with a press run to reveal the livery that the trams would carry in service.   The Maroon and White colour scheme, which is the same as the Lothian buses livery was the third different livery carried by the trams since their delivery.

Heading into 2014, Testing and driver training intensified over the following months eventually with a full trial timetable running in the weeks before the tramway opened, in preparation for the big day, when the tramway would finally open to the public.

The tramway finally opened to the public on Saturday 31st May 2014, with a low key launch.   1000 platinum tickets were issued (the number was evenly spread between machines at each of the stops on the system) for the first 1000 passengers.   Tram 255 was first to leave Gogar depot that morning, heading to the turn back loop at Haymarket Yards, where it was to be held as a spare tram to cover for any breakdowns that occurred or if traffic demanded a further tram in service.   Soon after 255 departed, tram 275, left Gogar depot as the history making first service tram, arriving at Gyle Centre from Gogar Depot just before 5am.   Such was the demand to travel on that first tram, 275 departed for York Place with a full load with many passengers left behind! 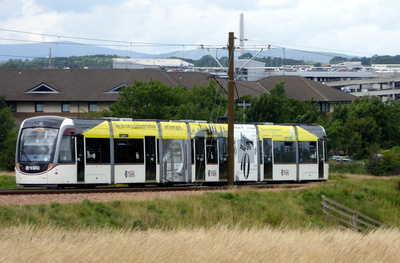 261 at Ingliston Park and Ride261 in its new vynal wrap for the Edinburgh Festival heads away from Ingliston Part and Ride with a York Place - Edinburgh Airport Service 28.7.17

Since that opening weekend, the tramway has gone on to be a massive success with passenger numbers being higher than expected.   In the first year alone, the trams carried 4.92 million passengers.   Running times have been extended to match the Airport opening hours and the frequency of the service has also increased as well.

Additional peak time extras were introduced during Summer 2016 and from January 2017, the trams became even more frequent running every 7 minutes during the day time with services reducing to every 10 minutes early morning and into the evening.

An additional stop was built near to the tram depot and connected to the Edinburgh Gateway rail station, which opened at the same time as an interchange for the Fife Circle and services from the North of Scotland.  The stop opened in December 2016 with tram 260 being the first to call at the stop, which is located between Gogar Depot and the Gyle Centre tram stop.

During 2018, the entire 27 strong fleet carried external advertising, 22 of which were adverts for CR Smith!   All adverts carried to date have featured advertising along the top of the tram and have  featured contravision advertising on the 3rd and 5th section of the tram.

See All Over Adverts page for a list and photos (where available) of all 74 adverts carried to date!

Special all night services were introduced on Saturday Nights in August 2017 to allow better travel home from the Edinburgh Festival, this was repeated in 2018 and 2019.   On 10th September 2017, special 'Bike Express' trams were run from St Andrews Square non stop to Ingliston Park and Ride in connection with the 'Pedal for Scotland' event.  These extras were running early morning and afternoon only to allow competitors to reach the Ingliston Showground where the event was starting from / ending.  The 'Bike Express' has been repeated for 'Pedal for Scotland' in subsequent years.

Construction work is already underway to extend the tramway to the originally planned phase 1 terminus at Newhaven from the current City Centre terminus at York Place.   The stop at York Place will be removed and replaced with a new stop at Picardy Place just round the corner on Leith walk.   The expected cost of the extension to Leith is expected to be around £144.7 million.   The cost would have been higher if it wasn't for the fact that the trams for the route are already in the fleet and the track and overhead poles for the route are already in stock.   Completion and opening of the extended route is expected in 2023.

Tram 258 was involved in a collision with a bus on a crossing just outside the Airport in June 2018, resulting in serious damage to the bus and the force of the collision forced the front 2 sections of the tram to derail.

During 2018, peak time extras have been introduced, increasing the frequency to anywhere between 3 and 7 minutes on weekdays with 15 trams required for service.   The timetable can be downloaded from the Edinburgh Trams Website

The tramway was affected by the Covid 19 pandemic from March 2020 onwards, with a drastic fall in the number of passengers travelling meaning a reduction in the number of trams in service.   As at July 2020, the trams were operating to a 15 minute headway with only 6 trams required on a daily basis, from September a 'peak time' 7 minute service requiring 12 trams operated between 12 and 2pm most days with the 15 minute 6 tram service operating at all other times.   All passengers using the trams require to wear a face mask unless they have a medical reason not to.   To advertise this fact, Trams 261, 262, 263 and 269 have had vynal masks added to their front ends with the message '#Staysafe, wear a mask'. Normal service was resumed on the tramway in Summer 2021 with the full 7 minute service being restored at this time.

Some Features of the Route

Some of the furniture you will find at the tram stops