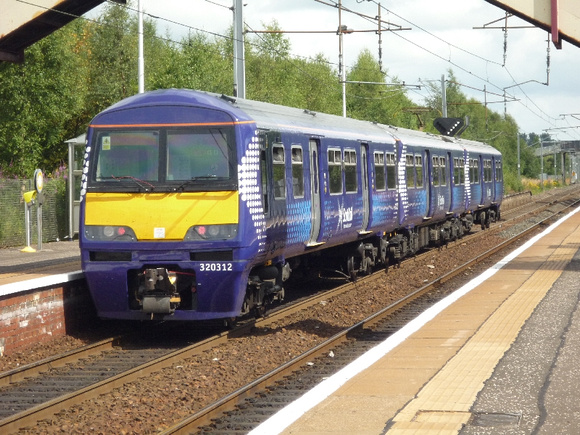 Built in York in 1989, these three car sets have been highly successful from the day of introduction. These 22 units with a large seating capacity of 230 seats, replaced all the class 311 and unrefurbished 303 multiple units still operating on the North Clyde Line. The 320's were initially intended to be used on the Argyle line services to Lanark and on the Hamilton Circle, however due to clearances in the tunnels between Anderston and Dalmarnock, it was decided that they wouldn't be used on this line in passenger service, only using the section between Rutherglen and Partick for ECS runs from Shields depot - Yoker depot through this section of line.   Appearances in Glasgow Central High Level by the 320's were rare occurances, usually reserved for naming of a unit until December 2014, when the Lanark service were diverted into the High Level.    From 2011, following a refurbishment and fitting of Yaw dampers and toilets, the 320's finally transferred over to the Argyle Line to work alongside the 318's.   From 2011 onwards, the 320's were refurbished, with the addition of a toilet in one of the driving trailers and a relivery into Scotrail livery.   320314 was first to be done and 320310 was last.   In 2016 an additional 7 class 320s were sent north to work in the Glasgow area.   They had the designation 320/4 and were class 321/4's which were cut from 4 cars down to 3 cars.

The 320's work on the Dalmuir - Cumbernauld / Larkhall / Motherwell / Lanark and Motherwell - Cumbernauld services, mainly in 3 car formation. Since the introduction of class 318's to the North Clyde and the Argyle line in place of the remaining class 303's in 2001, it has not uncommon to see a 318 and a 320 working in a 6 car service as they were built by the same company (BREL) and use the same electrical equipment.

The interior of these units have been refurbished with fitting of new seats, toilets luggage racks and Passenger information Screens and announcement system.

The sets are allocated to Yoker. All are painted in the new Saltire livery.