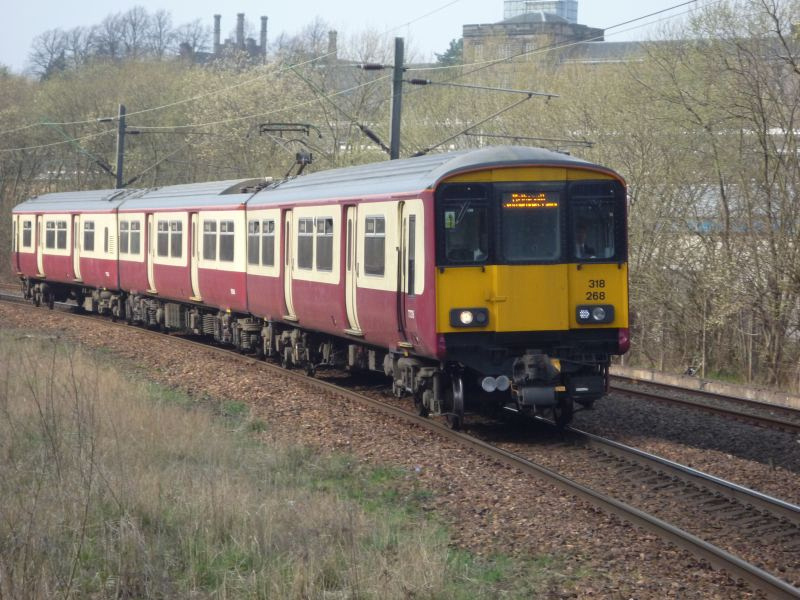 21 of these units were built by BREL in York during 1985 to operate on the newly electrified Glasgow to Ayr , Largs and Ardrossan Harbour Lines. Prior to introduction the 318's were tested on the Ayr line but also on the West Coast Main Line, indeed one of the press runs took place from Glasgow to Lanark. Until 2001 these units rarely strayed from the Ayrshire lines other than occasionally covering on Gourock, Wymess Bay and Cathcart Circle Services. Following the introduction of the class 334s the 318's began to cascade onto the Argyle and North Clyde lines and also replacing the 305's on the Edinburgh - North Berwick Services for a time.

The units have corridor connections throughout and have all electrical equipment including the pantograph is located in the centre car whilst the other 2 vehicles are driving trailers, one of the trailers is fitted with a toilet. Until refurbishment in 2005/06 the 318's had connections allowing passengers to walk through from one unit to another when working as a 6 car set.

On 11th July 1995 , an early morning service operated by 318254 and 318262 crashed through the buffers at Largs Station following the failure of the train brakes, demolishing the newly refurbished station and some shops before landing on the road.   318254 was out of service for a long time and required a new cab to be fitted whilst 318262 was able to be hauled back to Shields depot for examination and escaped relatively unscathed.  In September 2007, 318254 was involved in a serious derailment whilst operating a peaktime Anderston - Motherwell service, resulting in the leading vehicle leaving the rails, tipping over and landing on it's side in the tunnel outside Anderston Station. This particular set returned to service in 2009.

From 2001 onwards Class 318's began to appear on the Argyle Line and the North Clyde lines in large numbers due to the introduction to service of the class 334 units to the Ayrshire lines.   Prior to 2001 it was an unusual occurance to see a class 318 outwith the Ayrshire and Inverclyde services however in 1999 there did appear to be semi regular appearances by a class 318 working on the Argyle line involving the 7.46 Motherwell - Dalmuir via Bellshill.   I'm sure a class 318 may also have been used vice a 314 if short of units on the Argyle line back then.   Also following the transferral of the Class 314's to the Cathcart Circle, class 318's some times covered diagrams if short of 314's or spare class 303's.

The class 318's are a useful unit as well, due to it being similar to the class 320 (both classes were built by BREL at York) as it means that not only can either type rescue the other in a brakedown but can operate in multiple.   It is not uncommon to see a 6 car passenger service on the North Clyde and Argyle Line formed of a 320 and a 318.   Indeed there are some ECS workings which feature 9 car combinations with 318s and 320s and also a 314 and 318 6 car ECS working

Class 318's have a larger seating capacity than a class 334 and dare I say it, appear to be more reliable.   The introduction of the class 334 saw a reduction of seats on a number of services and on the Ayrshire line, this has caused overcrowding on trains.   In a bid to reduce this Scotrail increased all day time services to Ayr to 6 carraige sets and returned some 318's to the Ayr, Ardrossan and Largs services to increase capacity.

Since 2011, all 318's now operate on the North Clyde and more commonly, Argyle Line services. The 318's seem to operate on services which are known to be busier e.g. 7:44 Lanark - Garscadden, 8:16 Motherwell - Dalmuir via Bellshill, 16:44 Dalmuir - Lanark express and most Larkhall services.   They also occasionally work on the Cathcart Circle services as well.

At present all 318s wear the Scotrail Saltire livery and have received an internal refurbishment.