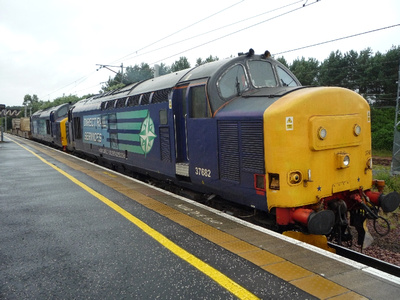 There is a few decent spots for photographs and video within 10 minutes drive of Carstairs.

Carstairs station, is a shadow of its former self.   Up until the early 1990′s this was an important station.  The West Coast Mainline was electrified and as the Cobbinshaw line to Edinburgh wasn't so passenger services heading to / from Glasgow and Edinburgh heading from / to locations in the south, split and joined together with the Edinburgh bound trains arriving / departing using diesel traction. Tjhis made Carstairs a regular stamping ground for Class 47's and a variety of other traction, which was regularly stabled in the sidings next to the up line.     Following the Electrification of the Cobbinshaw Line heading to England, this practice ceased with the exception of the Caledonian Sleepers and Carstairs saw very few stopping trains.   The once substantial station buildings were swept away during the late 1990's and were replaced by a small Ticket office.   The ticket office is only open from around 7.30am until 2pm.

Carstairs Station is located in the Clyde Valley around 25 miles south of Glasgow on the West Coast Main Line with a triangular junction to and from Edinburgh via the Cobbinshaw line just to the south of the station.   The junction between the WCML and the Cobbinshaw Line has such a severe bend that trains heading to / from the Cobbinshaw line must travel at only 15mph.   Carstairs is served 2 hourly by trains each way on the Glasgow Central – Edinburgh Waverley / North Berwick line (Monday - Saturday).   There is also a morning peak working to Garscadden via Glasgow Low Level and an evening peak working from Garscadden on Monday - Friday only as well as the Caledonian Sleeper stopping here early in the morning / late at night. 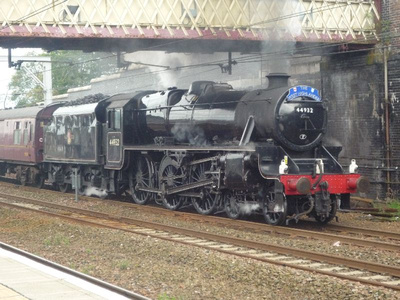 There are sidings opposite the ‘Up line’ which passes through Platform 2.   These sidings are used to store track machines, it has also been known for the occasional demic locomotive to be found on the siding nearest the main line awaiting collection or repair.   Locomotives for the Edinburgh portion of the Caledonian Sleeper are stabled here in the early hours of the morning.    There is a southbound (up goods) loop which is to the north of the station and visible from the end of the platform.   Platform 1 is on a loop with access to all tracks and is mainly used by the Carstairs - Garscadden peak service and trains from the Edinburgh direction coming off the Cobbinshaw line. The station its self consists of an island platform with a small ticket office, which is open from around 7.30pm till 2pm. The down line passes to the west of the line for Platform 1 whilst the down goods loop is to the west of the down line.   To the north of the station there is the former Permanent Way sidings, where for a short time Freightliner Loco's and coal hoppers were stored during weekends, the sidings being visible from the end of the platform at the north of the station.   Ravenstruther Coal Loading terminal is approximately 1 mile further north of Carstairs Station and is visible from the A70 heading towards Lanark, however is no longer used.

Carstairs station its self is usually quiet with not many people around on the platforms other than fellow spotters/ photographers, as there are long lulls between stopping passenger trains and the whole station is covered by CCTV making it quite safe.   I’ve only ever been there during the day though, night time might be a totally different situation. 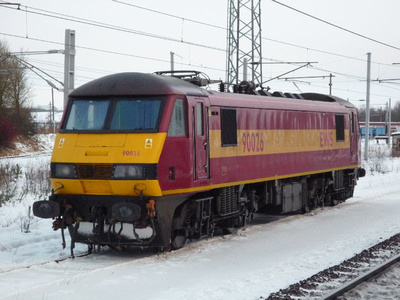 How to get there

Carstairs Station is in the village of Carstairs Junction in South Lanarkshire, only 3 miles from Lanark.   Carstairs Junction can be reached by leaving the M74 at Junction 11 (from the north) or Junction 12 (from the south) and following the A70 (signposted for Edinburgh) for approximately 7 miles.    Turn left at Hyndford bridge traffic lights and take the 1st right (signposted for Edinburgh A70 and Carstairs) follow this road till the end and turn right at the T junction then follow the road.  At Carstairs Village, turn right at the village green (Co-operative on right hand side), follow the road for approximately 1 mile and cross over the railway.   The station is on the left hand side.    From Edinburgh, take the A70 through Carnwath and then take the 2nd left (A70 to Ayr), turn left at the village green, then left again and follow the road for a mile, over the railway and then the station is on your left.

Carstairs, like any location can have its busy days and quiet days. In the past few years, the amount of passing daytime freights have reduced dramatically.

If you are interested in photographing freight, early morning and after 6pm appears to be the best times during the week or Saturday mornings. 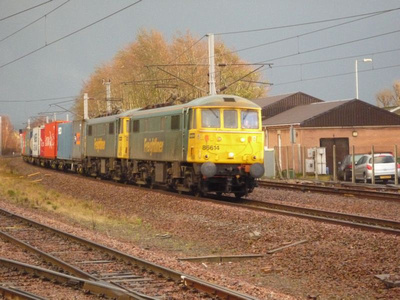 For southbound trains, the best place to photograph them is from the end of Platform 2, there is an 'OFF' sign around 1/2 way up the platform that can get in the way (See Photo) but you can get most of the train into your photo.   Further up the platform outside the ticket office can give good photos as well (See Photo).    The north of the platform is full of lampposts and OHLE masts making it harder to photo.   Ravenstruther loaded coal moves heading south generally use the Platform 1 track to access the up line (See Photo) but can also use the down line (see Photo) so the best place for these is next to the signal at the end of Platform 1.

Northbound shots are good from the south end of Platform 1 (see Photo), however just through the the other side of the footbridge is better as there is less OHLE stansions to avoid here and this is perfect for catching trains stopped in the down goods loop (See Photo). 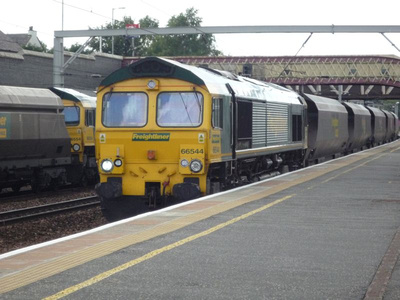 Note 1: Freights using Platform 1 heading south sometimes stop here awaiting a green signal to go onto the up line.   They can stop here for a while, blocking out the view of the northbound lines.

Below, I have listed some of the known freight/ sleeper workings that can usually be seen at Carstairs on a regular day. 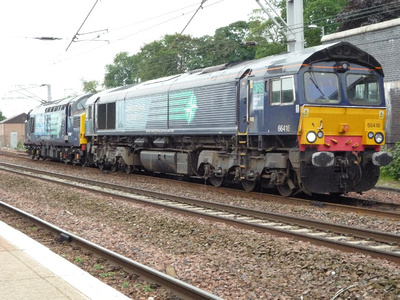 A large variety of traction passes through Carstairs, this includes passenger wise 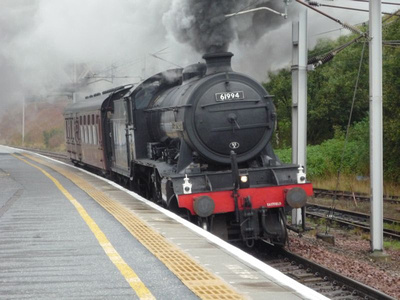 The Caledonian Sleeper stops at Carstairs late at night / early morning to join or split portions for Glasgow and Edinburgh usual haulage is a Class 92.

Steam locomotives are also seen regularly heading to and from Boness and the West Highland line.

There are a few alterniative locations nearby which can produce excellent photographs, these are