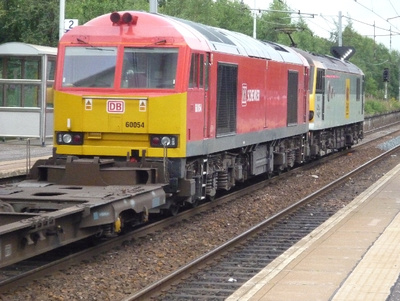 Location
Holytown Station is located on the Wishaw Deviation Line, approximately 3 miles north from Wishaw, 5 miles north from Law Junction and about a mile from Mossend Freight Yard and from Motherwell TMD.   Until sometime in the 1960's Holytown boasted 4 platforms and 2 station buildings.   Until 1992, Holytown would have been a mecca for all the traffic heading to / from Ravenscraig steel works which was located only a couple of miles away and the associated loco movements to / from Motherwell TMD with workings double and triple headed by class 37/0's and 37/3's as well as class 56's and class 60's.    Nowadays there is less freight than then however there is still plenty to see.

Nowadays station has 2 platforms and is located in the middle of a housing scheme.    Holytown has no station buildings but does have shelters on both platforms.   There is also a footbridge across the line, which is also used as a shortcut between the 2 sides of the housing scheme.  It also has a small car park on the Edinburgh side of the station.

There is a 3-way Junction to the North of the station (left goes towards Motherwell, straight on to Bellshill and Uddingston and right to Mossend, Coatbridge and the North) and a 2 way junction to the south, taking the line either eastbound to Edinburgh via Shotts or south to the WCML at Law Junction via Wishaw.

Holytown Station should be reasonably safe as it is covered by CCTV, however I would strongly recommend that keep your wits about you.   I certainly would not recommend this location after dark. 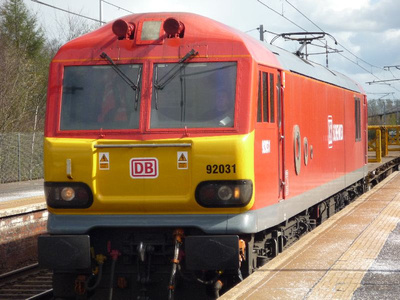 I'd advise taking photos from the Glasgow end of the platform.   The area around the footbridge from either platform is also OK depending on the light / sun. 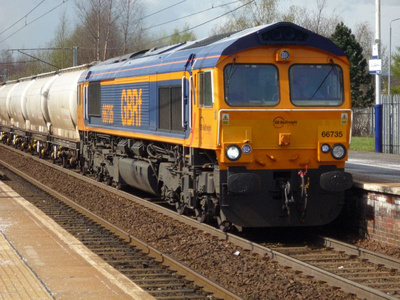 What will I see?

From a passenger point of view, services are dominated by class 385s and occasionally class 380s with 1 stopping service and 1 express service passing through each way in an hour. Class 156s or 158s can occasionally be seen on the Shotts line if there is a shortage of electric traction.   There is a single morning and evening express to and from Carstairs via the Argyle lines from Anderston which usually consists of a combination of either a pair/ mixture of class 318s or 320s.   There is also some ECS workings with some services from Whifflet being sent to Wishaw to reverse and can consist of 318s, 320s or 334s.    All Scotrail stock is painted in the Scotrail Saltire livery. 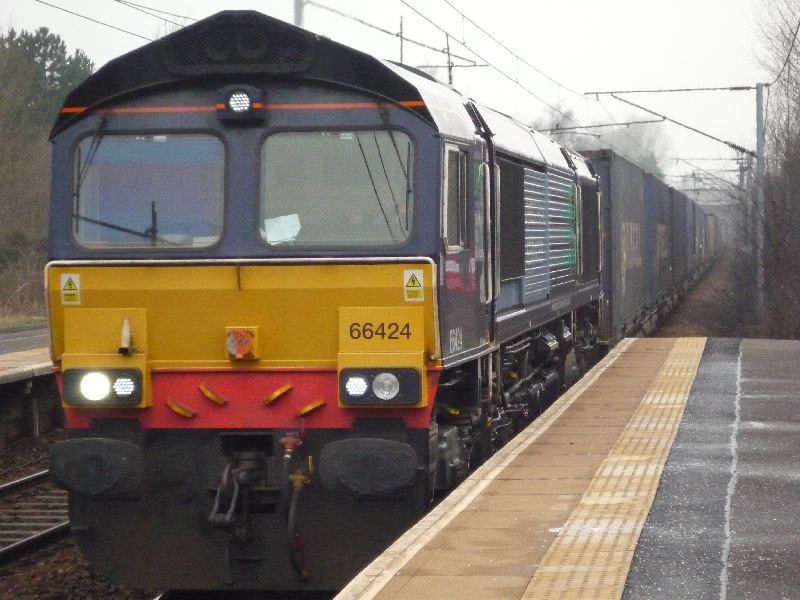 Freight that passes through Holytown between 2.30 and 5.30 on a weekday includes

Locos that can be seen here include 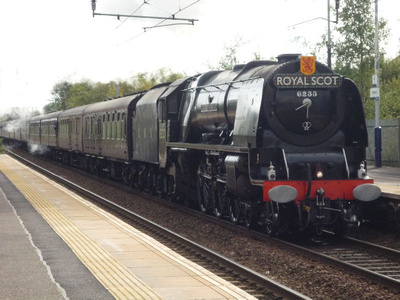 6233 'Duchess of Sutherland' at Holytown

There are a number of interesting workings that pass through Holytown, the main ones are