Edinburgh's Christmas and Hogmanay advert for 276 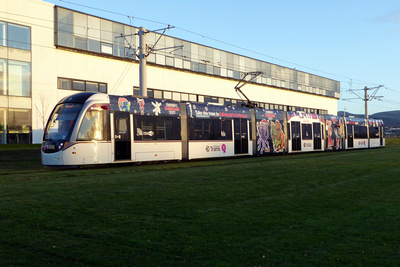 Edinburgh's CAF Urbos 3 tram number 276 has received it's first all over advert as is advertising Edinburgh's Christmas on one side of the tram and Edinburgh's Hogmanay on the other.   The artwork on this tram has been designed by local school children.

The Christmas advert (which is on the right hand side of the tram coming from the Airport) features a black background with some snow flakes, fairies and city skyline along the top, with the all over advert panels featuring an octopus with 8 socks on, a teddy bear hugging a Christmas Tree and what looked like a lion wearing a Santa suit with 2 other characters nearby!   The advert states 'Take the Tram to Edinburgh's Christmas and back again'

The Hogmanay advert (which is on the left hand side coming from the Airport) features a pink background with gloves and woolly hats on the top and one of the other sections features an ostrich and what looks like an owl wearing scarves and woolly hats!   The advert states 'Take the Tram to Edinburgh's Hogmanay and back again'.   Unfortunately as it was a rushed photo as the tram only stopped for a few seconds and the light wasn't great meaning I  didn't manage to get the full side in focus, however I will try and get another shot of it if its out next weekend!

The trams will be running a free service from Midnight - 5am on 1st January, running every 20 minutes from West End Princes Street - Airport, to allow people attending Edinburgh's Hogmanay to get back home.