I spent the Bank Holiday weekend in Blackpool from 28th April - 1st May and there were plenty of heritage trams out during that time.   11 different heritage/ illuminated trams were out in service over the weekend with 3 B Fleet trams also seeing use.   The only servicable trams from the heritage/B fleet not used were: 227(602) (undergoing an internal repaint), 230(604) (stored awaiting an internal repaint), 675+685 (work going on to its wiring), 718 (being repainted) and 719 (unknown).

Friday wasnt originally organised as having heritage trams running, however a late change saw Brush car 631 and Balloon 701 out on Pleasure Beach - North Pier/Cabin workings from 13.40 and into the evening, a couple of runs to Cleveleys and Fleetwood.

The Photo on the right shows Brush Car 631 passing the site of the old Imperial Hotel tram stop en route from Fleetwood - North Pier on a heritage working on 28.4.17.

There was to be a 7 tram heritage service operating over the weekend instead of the usual 6 route Bank holiday service.   Route G was an extra bonus working over the weekend and featured an illuminated tram on each of the 3 days.   It started later on the Saturday as it was used to take the FTS group from Rigby Road to Fleetwood for their annual convention around lunchtime.   Route F duties were shared between Bolton 66 and Fleetwood 40, whilst Route C was the shop tram and utilised a B Fleet balloon on each of the 3 days.

7 Heritage trams were due out on Saturday, allocated routes A-G. 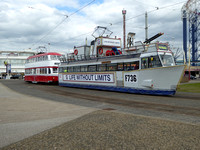 Balloon 723 had replaced Balloon 715, which had been due to work on route E.   The tram was later seen parked outside the electrical compound.

Also spotted at Rigby Road was Balloon 703, which has recently returned to Blackpool from Beamish and is sporting red and cream Sunderland livery from its time masquerading as Sunderland 101.   Brush Car 621, which is in the process of being prepared for a return to service in September for the Brush Car's 80th Anniversary in service, was partly visible parked at the front of the electrical compound (seen via the 60 x zoom on my camera).   I didn't travel on the heritage trams on this day as I decided to take photographs instead.  The photo above shows F736 and Balloon 701 stabled at Pleasure Beach in between workings on 29.4.17.

7 Heritage trams were due out on Sunday, allocated routes A-G. 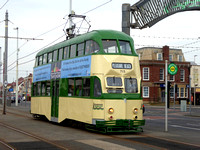 715 at BisphamBalloon 715 stops at Bispham with a heritage service to Pleasure Beach 30.4.17

7 Heritage trams were due out on Monday, allocated routes A-G. 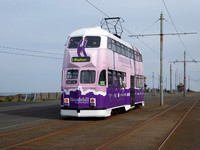 713 at CabinHoundshill Shopping Centre all over advert liveried balloon 713 pauses at Cabin with a heritage service to Bispham 1.5.17

As well as the heritage workings, the usual diet of Flexities were out with 14 out of 16 seen.  Only 003 and 016 weren't seen out over the weekend.   Overall, it was a fantastic weekend and the weather was good, which is always a bonus!

My photos from the weekend can be found at: http://scottishtrains.zenfolio.com/p474188147