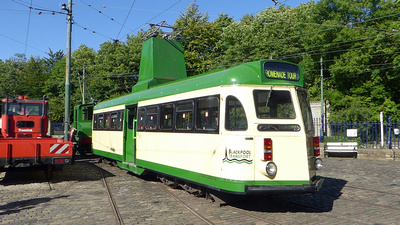 It has been announced that Brush Car 630 will be returning to the Blackpool Tramway from the National Tramway Museum at Crich on loan at some point soon.   The loan deal, which will allow 630 to remain in Blackpool until 2018, means that the tram will be able to take part in the Brush Car's 80th Anniversary celebrations taking place during the September Gold Weekend on 23rd and 24th September.   The deal will have an added benefit for Crich as the depot there is having its roof replaced this winter and the move will mean them having to find a place to temporarily store the tram, it will allow the tram to be stored undercover and gives Blackpool the advantage of having a heater fitted single decker to use on the heritage service.

630, like it's 19 sister cars were built by Brush of Loughborough in 1937, entering service in the same year.    Originally the inside of the Brush tramcars were considered to be the most luxurious trams ever built for British Tramways, with cushioned seating, heaters, clock and ceiling panels housing concealed lighting.    The Brush Cars have been a popular and reliable member of the Blackpool fleet for 80 years and were still seen in regular service until 2004 when a number of them were mothballed, however a handful survived in service until 2011.   Of the 20 trams built, 16 of them are still in existence in some form today.

630 was given a major overhaul in 1994/95 and featured low voltage lighting, trafficators, bumpers, new style lifeguards and fixed bus seats.   630 was the final Brush car to receive a major overhaul.    After many years of all year round use on the tramway on both service and specials and with the end of traditional tramway in sight, 630 was withdrawn from service in October 2011, just one week before the end for the traditional fleet.   630 was repainted into the 1990's livery carried when it first re-entered service in 1995 in preparation for its move to Crich.   630 entered service at Crich in 2012 and has seen use there ever since.   630's return to Blackpool will see all 4 of the active (or will be by September) Brush Cars (621, 623, 630 and 631) in service at the Gold Weekend, with a further 5 (624, 625, 627, 632 and 634) probably on display at the depot over that Gold Weekend.

Further information on the Brush Cars can be found at my Blackpool Trams website http://blackpool-trams.yolasite.com/brush-trams.php