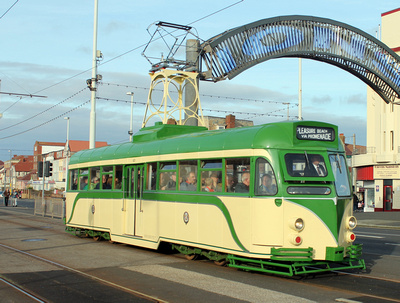 621 at BisphamIn the only 15 minutes of sunshine of the day, the fantastic looking Brush Car 621 in 1950's green and cream livery pauses at Bispham en-route to Pleasure Beach 23.9.17

I visited Blackpool for September weekend, which just so happened to co-inside with the Blackpool Tramway's 132nd Anniversary weekend.   Here is my report of the weekend:

A special service recreating the Cleveleys Flyers that this class of tram featured heavily on at various times of their lives operated on Friday afternoon and saw Brush Car 621 making its first appearance in service since 2004 after a recent overhaul and repaint into 1950's livery.   Also featuring Wartime Green and Cream liveried 623, which is on loan from Heaton Park, 90's liveried and refurbished 630 on loan from Crich and 60's liveried 631, which is part of the heritage fleet.

The trams operated between 1.30 and 5.30pm between Pleasure Beach and Cleveleys on the following routes:

631 failed at Pleasure Beach with a controller fault before departure on its final journey of the day.   623 worked to Pleasure Beach and picked up 631's passengers and worked its journey.

Into the evening and out came the Illuminations tour trams.   733+734, 736, 737, 717 and 718 were out on tours operating 2 tours each.    Trawler 737 was held at Bispham for a while on its 2nd tour of the night.   After 20 minutes, the passengers left the tram while it reversed on the centre track and pulled onto the stop and reloaded, giving it's passengers the rare opportunity for a tour through the illuminations facing backwards!

Sunday was the second of the two 132nd Anniversary running days and display of rarely seen trams and depot tours.   At Rigby Road depot, Brush Cars 634, 627 and 632 were lined up at the Fitting shop wall, whilst Brush Car 625, Engineering Car 754, Open topped Balloon 706 and Balloon 726 were lined up on the depot fan.   Balloon 711 was used as the shop tram at North Pier and Balloon 713 was used on the shuttle service running between Rigby Road Depot and Starr Gate Depot.

The depot tour started at the depot fan and went to the Electrical Compound, passing Birkenhead 20, which was stabled just outside it.   In the compound were numerous spare parts as well as Boat 230 (604) and Railcoach 679.   Walking along the front of the fan, many withdrawn trams were seen including twin car 676+686, Coronation 304, Centenary 642 and Centenary 645.   Next the tour went into the Paint shop and Standard 147 was on display having been partially rubbed down for a repaint.   In the Body shop, Standard 143, Boat 227 (602) were stabled, 227 was receiving an internal tidy up and rewire.   The body shells of Lytham 43 and Glasgow 1016 were also in the Body Shop.   In the fitting shop Balloon 719 was there for a blown motor to be replaced and 703 was on display.   There was various trolley towers and trucks also on display.  Also visible was some of the panels removed from 621 while it was being prepared for service.   After a ride down to Starr Gate depot on 713 (via the tram wash) we were then shown round Starr gate depot.  004 and 006 were at the front of the sheds in case they were required for service, whilst 013 was on the body lift where its trucks were being removed to allow it's wheels to be replaced.