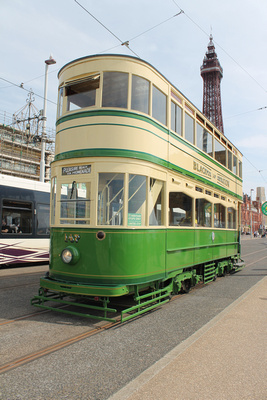 147 at North PierLooking fantastic following it's recent repaint, Standard 147 is seen at North Pier with a heritage service from Pleasure Beach 1.7.18

I was in Blackpool for a week long holiday from 1st - 7th July.   The blue heritage service was in operation for the full week with 2 trams required to work the promenade service from Pleasure Beach to North Pier with 4 journeys per day extended to Cabin.   The tram on Route A did the first 2 journeys to Cabin, while the route B tram did the final 2 journeys.

The weather was absolutely fantastic with blue sky and sunshine meaning that as boat 600 was the only open topped tram available for use during the week, it was used every day with either Standard 147(looking fantastic after it's repaint) or Bolton 66 working the other route.

Of the other open top trams: Boat 227(602) was still having work done to it's rewire and internal repaint, Boat 230 (604) is awaiting a rewire, Open topped Balloon 706 (Princess Alice) is out of service in need of a new underframe and an overhaul, Birkenhead 20 was still unavailable and Standard 143's overhaul (with open front ends) wont be complete until next year.

On Friday (6th), the service was thrown into chaos when Boat 600 dewired at the Pleasure Beach, with the trolley wheel also coming off the pole.  This meant that nothing could run south of Manchester Square for 2 hours while the overhead was repaired.   600's trolley wheel was refitted and the tram returned to service none the worse the wear.

All the flexity trams saw use at some point over the week, however it was good to see both 017 and 018 in service. Both are identical to 001-016 both externally and internally although the fresh paintwork on the new trams makes 001-016 look in need of a repaint, especially on the purple areas which look faded compared to that on 017 and 018.

A full gallery of photos from the week can be found at: http://scottishtrains.zenfolio.com/p548244318