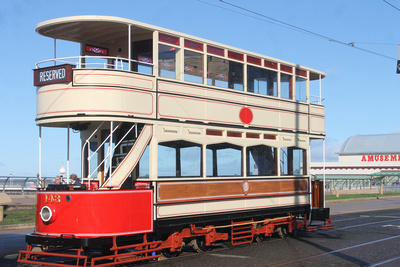 The Blackpool tramway anniversary weekend is one of the highlights for tramway enthusiasts. Over the course of the weekend, every heritage tram that can run will run at some point.

This year was no different!

I arrived in Blackpool to torrential rain, which fortunately eased around 3pm. The 2 car heritage tram service was in operation and due to the weather, Brush car 631 and Balloon 723 were used on the service.   631 was on diagram A and 723 was on diagram B (Diagram B operated the 14.40 and 16.40 extended services to Cabin.

Standard 143 was supposed to be working a tour for the Fylde Tramway Society during Friday evening, however it had developed a motor fault, which unfortunately left the tram out of service on what was supposed to be it's debut weekend.   Bolton 66 substituted for 143.   The tour was eventful as Bolton 66 had an overheated axle and had to be left at Fleetwood Ferry, while it was repaired.   The tour participants were transported to Manchester Square on board Flexity 014, where they disembarked and headed over to Rigby Road to continue the tour onboard Centenary 648.

Saturday started bright and sunny.   The first day of the anniversary weekend saw plenty of trams out: Bolton 66 had been repaired following the issue the night before and returned to service.   Standard 147, Boat 227, Brush Car 631, Centenary 648, Ex Towing Railcoach 680, Balloons 701, 715, 717 and 723.   Balloon 713 operated on the depot shuttle service between Rigby Road and Starr Gate.   631 and 680 operated an hourly service between Fleetwood and Starr Gate.

Millennium Balloon 718 was used as the shop tram at North Pier, whilst the superbly restored Standard 143 was on display at North Pier beside 718.   At Rigby Road Twin Car 675+685, Brush Car 634 and Boat 230 were on display along the fitting shop wall.   All 3 trams are awaiting rewiring before re-entering service.   On the depot fan, All over red liveried Centenary 645, Wynsor world of shoes and orange liveried 761 and Plum and Cream liveried OMO 8 were displayed.

In the afternoon, the heavens opened and 227 was quickly dispatched back to depot.   Balloon 701 worked the final heritage service of the day from Bispham to Manchester Square.

Sunday began with more torrential rain, which lasted until 2pm.   The tram allocation changed due to the weather. The morning saw Brush Cars 621 and 631, Centenary 648, Balloons 713, 715, 717 and 723 and Illuminated trams 736 and 737 in service. Balloon 711 worked the depot shuttle, while 715 and 723 worked an hourly service between Starr Gate and Fleetwood.     Once again Millennium Balloon 718 was used as the shop tram at North Pier, whilst the superbly restored Standard 143 was on display beside 718.

I went on the 11am depot tour.   The tour, led by Bryan Lyndop, the Head of Heritage at Blackpool Transport began in the Electrical Compound where Boat 230 and Brush Car 634 were stabled.   Both trams are expected to be rewired to allow them to return to service in the next few years. The first tram to be rewired will be Twin Car 675+685.   Work has already commenced on removing the old wiring from this tram.   Next we were taken into the rear part of the main running shed where we viewed some of the withdrawn or stored trams.   Visible were Balloon 726, Boat 600 (which was near the back of the depot to stay dry!), Coronation 304, Balloon 701 and Millennium Balloons 709 and 724.

We were then taken across to the fitting shop, which although empty of trams, had a wide array of parts visible such as motors and seating.   The steelwork for the new underframe that will be built for the major restoration of Balloon 704 was also visible.   The Body Shop featured the body shells for future restorations Lytham 43 and Glasgow 1016. There was also the framework for a project from a local college for a replica of the 'tank tram', which used to travel around the system during the first world war.    There wasn't any trams in the paint shop, however Standard 143 was expected to return there soon to have it's new paintwork varnished.

As our tour slightly over ran and the shuttle tram to take us all to Starr Gate depot for the second part of the tour had left with out us, we got the chance to take some photos of some more of the withdrawn trams from the front of the depot.   It was possible to see trams such as Balloon 720, Brush Car 632, Balloon 708 and the Roadliner tram from Preston.   After a bus had been scrambled to take us to Starr Gate, we were soon on our way.

At Starr Gate, we saw the stabling sheds, where Flexity 004 was the spare tram and was receiving repairs to a minor fault.   In the engineering side of the depot, Flexities 007, 010, 011 and 018 were receiving maintenance.    Soon the tour was over and out on the tramway, the weather was beginning to improve and Standard 147, Ex Towing Railcoach 680, Balloon 701 and 733+734 came out into service to join the trams already out.

Into the evening and the weather had improved dramatically! The Western Train 733+734, HMS Blackpool 736 and Balloon 717 were joined in service by Boats 600 and 227 on Illuminations tours.   Both boats were fully loaded on both trips made through the lights.

Over the course of the weekend, almost all of the active heritage fleet made an appearance either in service or on display or as a shop tram.   The only trams in the active fleet not to see any use were Centenary 642, Millennium Balloon 707 and B Fleet Balloons 700 and 719.

All the Flexities were seen out over the weekend except for 007.   014 returned to service after a number of months out of service.

My Gallery of photos from the Weekend can be found at: https://scottishtrains.zenfolio.com/p117643997