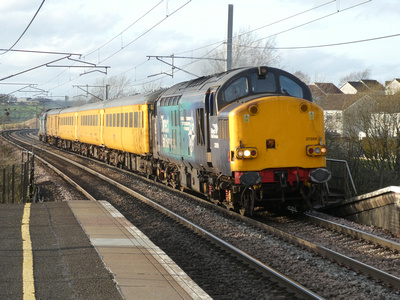 In recent months, the Network Rail PLPR test train has been operated by DRS class 37's instead of Colas.

On 21st February, the test train was seen out on the West Coast Main Line passing through a sunny Carluke station enroute to Lanark, where upon a quick stop off and change of ends, it would return north through Carluke again about an hour later. 37059 and 37218 were the locomotives used on today's train.

The photograph shows DRS liveried 37059 and 37218 top and tail the Network Rail PLPR Test train as it passes through Carluke whilst working 1Q75 Mossend - Mossend via Lanark 21.2.19