Overhauls for Balloons 704 and 706 at Blackpool 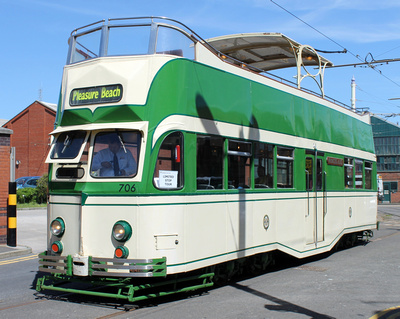 Balloon 706 at Rigby RoadBalloon 706 prepares to leave Rigby Road heading into service on the Heritage service 23.5.15

Two excellent pieces of news have came from the Blackpool Tramway this week:

The first is that the major overhaul of the popular open top Balloon car 706 'Princess Alice' will begin later this year, the preliminary work has already begun with the fabrication of a new underframe for the tram now underway. 706 has been stored since the end of the 2015 season in need of an overhaul and the replacement of the underframe.

The Fylde Tramway Society have been fundraising with the target being the estimated £50,000 cost of the work to 706 and have so far raised £10,000, enough to make a start on the underframe. They are still looking for donations, which can be made at https://www.gofundme.com/039princess-alice039-706-appeal?utm_source=facebook&utm_medium=social&utm_campaign=fb_u_g&fbclid=IwAR1ELEFxv1OLYkvJ6-gZxKlH4xgBcOlxefhe7YVgHapJ2R3chmlvfFNHFHg

It is hoped that 706 should return to heritage service in 2021, the Fylde Tramway Society's 50th Anniversary.

The main photograph shows Balloon 706 departing Rigby Road depot on 23rd May 2015 (it's last year in service) to work on the Heritage service.

The other big piece of news is that as well as having the components to create the underframe for Balloon 706, there is a second underframe being created to allow a second Balloon to be restored, with work being undertaken simultaneously with 706.

Balloon 704, which was withdrawn at the end of the 2003 season in need of a major overhaul, will be restored to late 50's / early 60's condition and will be renumbered back to 241. Having 704 back in the heritage fleet should complement Balloon 717 as well as allowing a series 1 balloon to be returned to near original condition. It is expected that 704 will regain it's curved roof windows on the top deck and possibly even the thinly upholstered upper deck seating, which one graced the former open topped series 1 Balloons! An estimate or timescale on when 704/241 will return to service has not been announced as yet.

With both 704 and 706's returns being in the future, 2019 also holds plenty of interest for fans of the Blackpool Tramway.

It is expected that Millennium Balloon 707 will return to use during the year, having been stored since 2013. The flat fronted Balloon is being brought back into use as an additional high capacity tramcar for the illuminations, following Millennium Balloon 718 proving to already be popular in this role due to the large end windows on the top deck giving an excellent forward / rear view. 707 is to receive the Millennium Green / Cream / Grey and Black livery already carried by 718 and originally carried by 707 when it emerged from overhaul in this style in 1998.

August 28th will hopefully see Standard car 143 make it's long awaited return to service following a major rebuild. 143, was withdrawn from passenger service in 1957 before becoming Engineering car 3 / 753. It continued to find use in this role until 1990 when it's diesel engine caught fire, causing extensive damage to the tram. 143 was mostly overhauled by the LTT between 2008 and 2010, however Blackpool Transport and completing the overhaul, which will see 143 in a form, not currently represented by a Blackpool Standard in preservation: open end driving platforms and open balcony ends.

It is also expected that ex towing railcoach 679 will return to service in it's original form as Series 2 Railcoach 279 complete with pointed ends some time this year. The FTT group are currently hard at work on the tram.