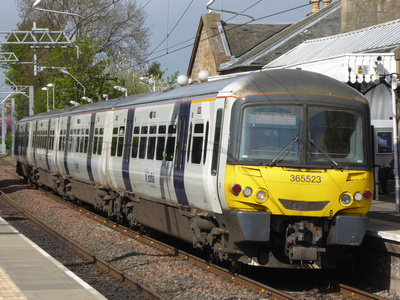 365523 at Linlithgow365523 pauses at Linlithgow on its first driver training working for Scotrail with 2Z52 Glasgow Queen Street - Linlithgow UPL. The livery is an amended version of the Great Northern livery with dark blue doors and Scotrail branding. 10.5.18

The 365's were on loan for a year due to the initial delays to the class 385's entering service and a shortage of stock as some of the DMU fleet going off lease.

10 of the 365's saw use for Scotrail, initially on the E&G line and laterally on the Edinburgh - Dunblane line, however there are now enough 385's available for service to allow the 365's to be stood down.

The photo shows 365523 pausing at Linlithgow on its first driver training working for Scotrail with 2Z52 Glasgow Queen Street - Linlithgow UPL on 10th May 2018.