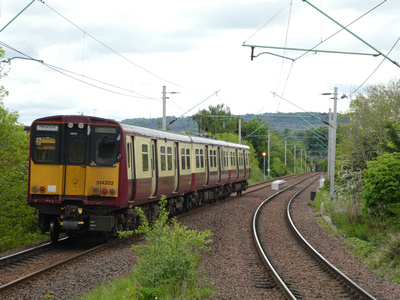 Since the start of the new May 2019 timetable on 19th May, the number of class 314's required for service has shrunk. With around 60 class 385's now available for service and now beginning to operate on the Lanark and on one diagram on the Inverclyde route, class 318's and 320's have been freed up to operate on Gourock, Weymss Bay and Paisley Canal services that were previously worked by class 314's.

Prior to the timetable change, 314208 was withdrawn in late April, with 211 also being withdrawn on 1st May, with both units now at Yoker for storage.  However after service ended on Saturday 18th May, 314207, 314210 and 314215 were also withdrawn from service. All 3 units are currently stored at Shields.

On Monday 20th May, I noted the following

314203+314205 were coupled together and stabled at Shields, most likely they will have worked morning and evening peak Cathcart Circle or Neilston services.

I was in and around Glasgow till around 2.15pm and the units worked the following services departing Glasgow Central: