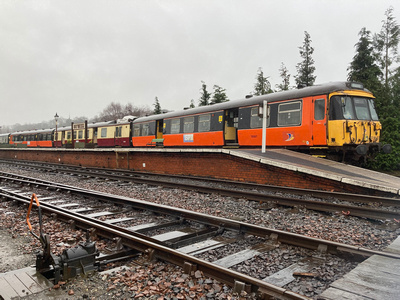 303032 is one of the original set of 35 class 303s (Then known as class AM3) built in 1959 by Pressed Steel of Elderslie for the electrification of the North Clyde lines, a subsequent order of 56 sets raised in 1960 took the number of units up to 91.   303032 wore a succession of liveries starting with Caledonian Blue, then BR Blue and Grey then Strathclyde Transport 'Red' and Black livery from the 1980's through till withdrawal, receiving it's final repaint in the mid 1990's.  032 would operate on the North Clyde lines, Argyle Lines, Cathcart Circle and Clyde Coast lines over 42 years until withdrawal around June / July 2002.

303032 is still occasionally hauled up and down the line at Boness by a Class 26, 27 or 37 working in blue star mode.  A ride on the set during the diesel galas brings back memories including the sound of the door closing alarm, the hiss of the air brakes and the driver having to get out and force a set of doors closed before the set will move!   303032 is still in the same coat of paint as it was when it arrived at Boness with the trailers in Orange and Black Strathclyde Transport livery and the motor coach in the SPT Carmine and Cream livery.   303032 hasn't been used for many years and has been on display in the display shed.   It was extracted from the shed and placed in the display siding for the Diesel Gala at Bo'ness on 29th December 2021.