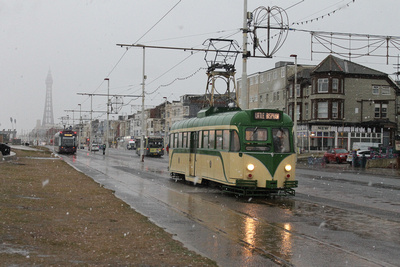 The weekend of 19th and 20th February saw Blackpool Heritage Tram Tours first 'Gold Weekend' of 2022.   The weekend was due to start of Friday 18th with an evening tour onboard the Western Train, however the tail end of Storm Eunice put paid to that and an additional tour operated on Saturday 19th instead.

The Gold Weekend saw the use of 6 heritage trams on a series of workings from Pleasure Beach to Little Bispham, Thornton Gate or Fisherman's Walk in Fleetwood.   Due to gas pipe works in Fleetwood, both the service and heritage trams could not reach Fleetwood Ferry so terminated at Fisherman's walk instead.   There was also the chance for a twice daily run by heritage bus to Fleetwood and back on both the Saturday and Sunday and twice daily tours of Rigby Road Depot.

The initial allocation for the Heritage Fleet on the Saturday was Diagram A: Balloon 717, Diagram B: Brush Car 631, Diagram C: Millennium Balloon 718, Diagram D Boat 600, Diagram E: Bolton 66 and Diagram F: Centenary 648.   This was to be Centenary 648's first run in service since pre pandemic in early 2020.   Due to the poor weather, Boat 600 and Bolton 66 were removed from the roster and replaced by the more suitable enclosed Brush Car 621 and Balloon 715.

I arrived in Blackpool around 10.15am to torrential rain.   By the time I got parked at Pleasure Beach and made my way to Rigby Road depot, the rain had turned to rather large flakes of snow and spotted enroute were Brush Car 621 and Balloon 717!   I was booked on to the 11am tour at Rigby Road and luckily we were allowed in early to take shelter in the main tram shed! 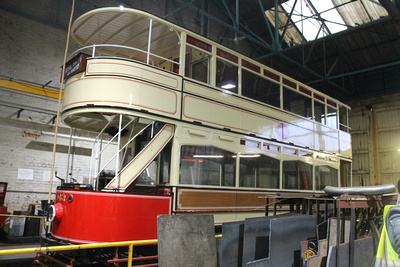 Standard 143 at Rigby Roadrecently restored open vestibuled Standard car 143 is seen in the Fitting Shop awaiting attention to it's motors prior to a return to service 19.2.22

The tour began with a trip to the Fitting Shop, which incidentally was the warmest building on the tour!  In the Fitting Shop was Standard 143, which had been getting attention to it's motors and was being prepared a potential return to service at Easter!

We were also shown the Blacksmith's forge and some of the tools used. Due to the uniqueness of the heritage fleet and the lack of spares, many of the replacement parts are home made in Rigby Road depot, an example of homemade parts was also layed out in the fitting shop in the form of a brand new underframe for Balloon 704, which was built by only one person!

Balloon 704 has been stripped to a shell for a heritage restoration back to 1950's style.   It was good to hear that a second new underframe was also in the pipeline, this one being for open top Balloon 706, which is currently withdrawn.

We also saw the gas burner that is used for the removal / fitting of tyres to the wheels.   Also seen in the Fitting shop was a couple of refurbished truck frames from a Centenary car.

Next we were taken into the Paint Shop, it was interesting to hear that all the buses and trams are still hand painted, being worked on at the time was a single and a double deck Palladium bus as well as the replica tank tram.  The replica tank tram was a project by some local colleges to replicate a vehicle that would have been created from the body or around the frame of a disused tram on many systems across the country during World War 1 to raise money to buy tanks.   There was also an interesting array of art work and posters on the wall. 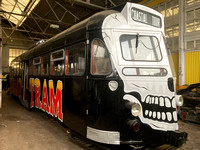 634 at Rigby RoadTerror Tram all over advert liveried 634 is seen in the fitting shop at Rigby Road awaiting the fitting of a Pantograph tower and pantograph prior to returning to service for the first time since 2004. 19.2.22

After the Paint Shop we moved next door and visited the body shop where the body and frames of Lytham 43 and Glasgow 1016 are stored along with a large scale model of Standard car 40, which was used as part of a display back in 1985 for the Centenary year.

In the Body Shop, Work was well underway on the bodyframe being carried out on Balloon 704, which as mentioned above had been stripped to a shell for restoration to commence.   Once its new underframe is complete, the old underframe will be rolled out from underneath it and scrapped, whilst the new frame is rolled underneath the body frame and work can commence on the restoration.   Also in the body shop was Brush Car 634, which was repainted into Terror Tram advert during 2021, complete with skulls on the end, a recreation of an advert carried by the tram in the late 1990s.   634 was awaiting the fitting of a trolley tower and pantograph, to allow it to re-enter service for the first time since 2004.

One of the main reasons the tours are taking place is to help to raise funds to repair the roof of the main tram shed, which is in a terrible state with holes and leaks everywhere and that's where we headed next!   We were firstly taken into the Electrical compound, which being the driest part of the main depot is used to store the boat cars and some others that are awaiting attention.   Boats 600, 227 (602) and 230 (604) along with

I then headed back to the prom and by this time, the snow had halted and had began melting.   It was a strange sight seeing Brush Cars 621 and 631 with their fronts covered in snow!   I caught Brush Car 631 up to Bispham for a few shots of the trams in the snow, then caught 718 down to North Pier. On reaching North Pier, Balloon 711 had appeared in the loop and was being used as the shop tram and the sun had came out! After getting a few photos at North Pier, I walked back along the prom in the wall to wall sunshine, taking photos of the t

715 at Bispham70's Green and Cream liveried Balloon 715 complete with period advert for Blackpool Zoo approaches a snowy Bispham with a heritage service to Pleasure Beach 19.2.22

rams on the way. I reached Pleasure Beach at 3.20 and was hoping to catch a couple of photos of 648, however the tram had suffered from a loss of power fault and by the time it was repaired, it was over 20 minutes late in reaching Pleasure Beach.   648 was returned to depot and Balloon 711 took over the remainder of 648's duties.   It was at this point it was time for me to head back home.

Overall, it was an enjoyable day, I'd thoroughly reccomend the depot tour though you will need to be quick to book as they are fully booked up for months!  More photos from the day can be found at: https://scottishtrains.zenfolio.com/p490848536

My entire collection of Blackpool Tram photos from 2003 to today can be found at: https://scottishtrains.zenfolio.com/f595940839