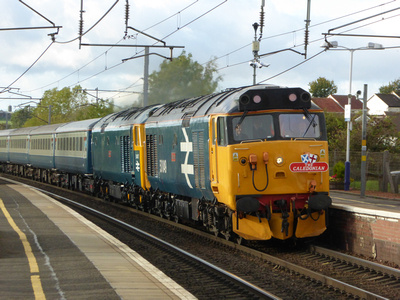 Today, there was a rare sight on the West Coast Mainline, with a pair of Class 50's operating on a railtour from London Euston - Glasgow Central and return.   The class 50 (or 'Hoovers' to give them their nickname) was built between 1967 and 1968 and operated on the WCML between Glasgow and Crewe.   On completion of the electrification of the WCML in in 1974, the 50's moved to South West England then services on the London - Exeter and London - Hereford services before being withdrawn in the late 80's / early 90's.

Today's working was the first time class 50's had been in Scotland since 50007 and 017 visited Bo'ness in 2015 for the Summer Diesel Gala.   Unfortunately I had something else on and missed the northbound journey, but did manage to catch the southbound journey at Carluke.

The 50's operating on the railtour were: