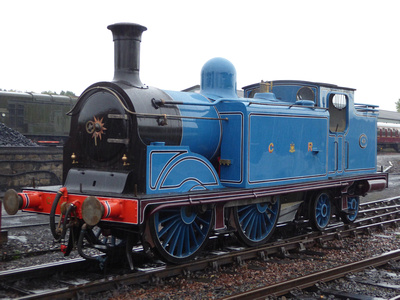 419 at Bo'nessThe beautifully restored Caledonian 439 class number 419 is seen stabled outside the steam shed at Bo'ness 12.10.18

The beautifully restored Caledonian 439 class number 419 is seen stabled outside the steam shed at Bo'ness in torrential rail on Friday 12th October.

The loco, which has just undergone a lengthy overhaul, is due to be relaunched into service at the Bo'ness steam gala, which is taking place from November 2nd - 4th November.

As well as 419 being in service, Caledonian Railway 812 class no 828 is visiting on loan from the Strathspey Railway for the weekend and should make a fine sight as it travels along the banks of the Forth.

An interesting fact about the 812 class that I didn't know about until recently is that they were the inspiration for 'Donald' and 'Douglas', the Scottish twin locomotives from Rev W Awdry's 'Railway Series' and it's TV adaptation 'Thomas the Tank Engine'!