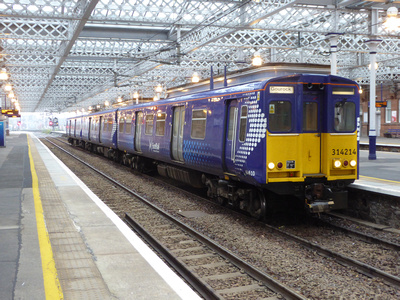 I was heading into Glasgow for lunch, but decided to head in early to ride on and photograph some class 314's.   Over the space of 3 hours, I managed to spot, photo or ride on 13 of the 16 members of the fleet.

Enroute, 314207 was seen between Mount Florida and Cathcart with a Cathcart Outer Circle service and 314206+314216 passed at Pollockshields East with a Glasgow Central - Neilston service. The Neilston services were all worked by pairs of class 314's.