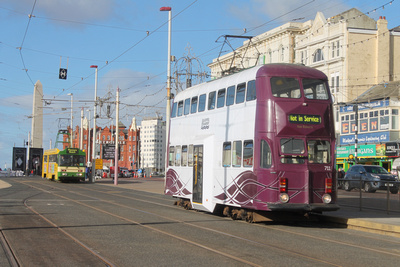 711 and 642 at North PierBalloon 711 returns to Rigby Road after a day stabled at North Pier as the shop tram while Centenary 642 approaches with a heritage service to Pleasure Beach 23.9.18

I arrived in a very windy Blackpool at 2pm and Brush Car 621 and Ex towing Railcoach 680 were working an afternoon Heritage service from 1.30-5.00pm between Pleasure Beach and North Pier / Cabin.  The tramway was in chaos after 4.30pm due to an issue with the overhead line and high winds meaning the tramway was closed temporarily between Starr Gate and Manchester Square.

Into the evening and the Fireworks championship entry for the night had been cancelled due to the weather.  The prom was quieter than a normal Illuminations Friday night, meaning only 2 trams out on illuminations tours.  Frigate 736 and the Western Train 733+734 were used with Trawler 737 being used for the Ghost tram tour to Fleetwood and back.

Saturday was a lot calmer with a cool breeze and alot of cloud about.   There was a number of heritage trams out on the enhanced heritage services during the day.  711 was stabled at North Pier for the day as the Shop tram. 719 was used on the depot shuttle between Rigby Road Depot and Starr Gate. 621 and 717 operated a heritage service between Starr Gate and Fleetwood, while 40, 147, 600, 631, 642, 701, 715, 718 and 723 operated heritage services and specials between Pleasure Beach and North Pier / Cabin / Bispham / Little Bispham / Cleveleys and Thornton Gate.

I was in Blackpool till 1pm and it was only Flexities out in service.   Interestingly, Flexities 003 and 016 have received a pink all over advert for Prettylittlething.com.

Overall it was a fantastic weekend with plenty of trams to see. My full gallery of photos can be found at: https://scottishtrains.zenfolio.com/p725771107