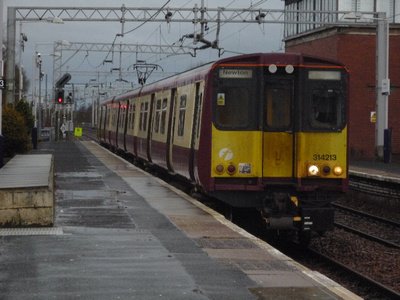 Today, 314213 became the 2nd class 314 to be taken to Glasgow Works to be stripped for spares before scrapping. The spare parts should help to keep the 11 units currently still in service working for the time being.

314213, one of 9 of the 16 strong fleet to retain the former SPT Carmine and Cream livery, was withdrawn initially on 21st September, before being reinstated in early October. 213 remained in service for only a couple of weeks before failing on 12th October and being transferred to Yoker for further storage.

On 12th February, 213 was collected by 37884 and hauled from Yoker to Glasgow Works via Glasgow Central Low Level, Carmyle and Gartcosh.

Unfortunately, I couldn't make it to catch a photo of today's working, however here is 314213 in happier times arriving at Newton with a service from Glasgow Central via Queens Park on 31.12.2012