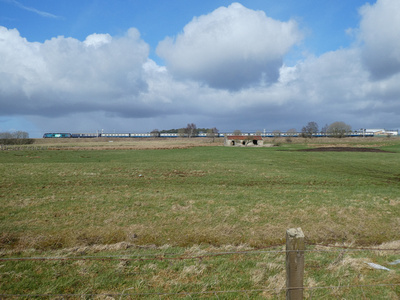 The return working of the Pathfinder Welsh 6 Nations Rugby fans Charter heading to Carmarthen from Motherwell ran on 11th March. 68016 was again used to haul the set, which was made up mainly of Blue / Grey Mark2's. Starting from Motherwell, where supporters staying in Glasgow were picked up, the charter worked south to Carstairs before diverting east over the Cobbinshaw line to Edinburgh Waverley.

At Edinburgh, it picked up its remaining passengers before returning along the Cobbinshaw line to Carstairs East Junction. As the charter was running early by this point, it was held here awaiting its correct time and for a southbound Pendilino from Glasgow to pass.

The charter then joined the West Coast Main Line and headed south. At Carlisle, 68016 was replaced by First Transpennine Express liveried 68019 for the remainder of the journey to Carmarthen.

For completeness, the table from the part 1 post, now containing the return working's loco allocation.