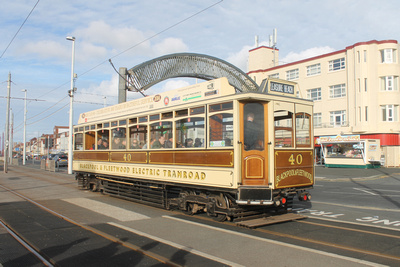 40 at BisphamBlackpool and Fleetwood 40 pauses at Bispham with a heritage service to Pleasure Beach 22.9.18

On 2nd March, Blackpool and Fleetwood Box Car 40 ran in Blackpool for the final time.   It's loan spell in Blackpool is now over and on Monday 4th March, the tram was moved by low loader to Beamish, where the tram will enjoy a spell on loan before moving to the Crich Tramway Museum.

Built in 1914 by the United Electric Car Company in Preston, Box Car 40 was one of a batch of 4 additional trams built for all year round use on the tramroad thus giving the tramroad 15 enclosed trams.    40 was a mainstay on the Fleetwood to North Station service until 1928 when the Pantograph Cars were introduced to the service.   40 was renumbered to 114 in 1920 when the Tramroad was bought by Blackpool Corporation Transport.

After 1928, 114 found use on the promenade and occasionally on services on the Lytham Road route.   114 was withdrawn in October 1937 (probably around the same time as the Brush Cars came into service) and found a new life as works car 5 and was used as a mess room and to transfer workmen to the trackwork sites.  The tram continued in this role until 1960 when it was restored in time for the 75th anniversary of the tramway and regained it's original number (40).

40 then left for Crich in 1963, later moving to Heaton Park tramway and finally returning to Blackpool for seasonal use on specials in 1995. 40 has remained almost continuously at Blackpool since them with the exception of a return to Crich to celebrate its centenary in 2014.

The photo shows Blackpool and Fleetwood 40 paused at Bispham with a heritage service to Pleasure Beach on 22nd September 2018.