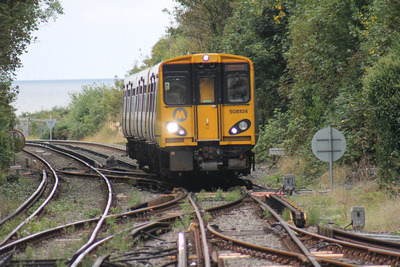 I made my 3rd trip of the year to the Merseyside area to catch some more of the 507 and 508 fleet before they are replaced by the class 777.  I'd planned the trip to co-inside with one of the new class 777 fleet being put on display at Birkenhead North.

As I drove down to Merseyside and expected the roads into Liverpool to be busier with it being the weekend, I parked at Maghull North park and ride, this was less than 1 mile off Junction 3 of the M58 and had ample parking.   It is on the Ormskirk and just a 20 minute journey into Liverpool Central.

At Maghull North, I caught 507025 into Moorfields and changed to the deep level platform for the Wirral services.  The deep level line is a one way circular line under the city centre with both ends meeting at James St (runs James Street, Moorfields, Liverpool Central, Lime Street, James Street).  At Moorfields deep level platform, I caught 508141+508114, which was on an Elsmere Port service to Hamilton Square, here I changed to a New Kirby service led by 507032 to Birkenhead North.   After a look round 777010, I caught 508120 to New Brighton.

Travelling to New Brighton, I saw 2 of the Welsh line class 230s, however as the train windows were too dirty, they were hard to photograph.  At New Brighton the train arrived into Platform 2.  The station its self had a 1930's style canopy which ran around half way up the curved platform.  At either side of the lines into the island platform, there was storage sidings, (2 to the left of platform 1 and 1 to the right of platform 2) where four units, 507012+508130 on the left and 507020+507011 on the right.   I think that extra units not required are stored here at the weekend.   I caught 508104 back to Birkenhead and after another quick look round 777010, I caught 507018 on a New Kirby service back to Moorfields.