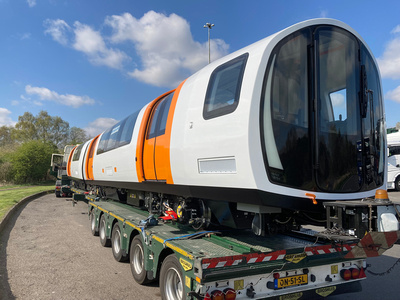 New Glasgow Subway CarOne half of one of Glasgow Subway's 17 new Stadler built Metro trains seen on the rear of a low loader at Hamilton Services on the Northbound M74, enroute to Broomloan Depot from Altenrheim in Switzerland. Once fully in service, these trains will eventually operate in Driverless mode 24.4.22

Today as I was driving along the M74 and passing Hamilton Services (Northbound only services between Junction 6 Hamilton / Motherwell and  Junction 5 Raith Interchange) I happened to notice one half of one of one of the new Glasgow Subway Trains on the back of a low loader in the lorry park so decided to visit the services to investigate!

It so happened that the other half of the same set was also parked up at the far end of the lorry park!   The as yet unidentified set number was enroute to Broomloan Depot from Altenrheim in Switzerland and was being held at Hamilton Services until later in the day when the remainder of the route into Glasgow was a bit quieter with less traffic.

Glasgow Subway have ordered 17 Stadler built 4 car Metro trains to replace the 32 1970s built Metro Cammell Motor Cars and 8 1992 built Barclay trailers which are currently used on the system.  The new trains are made up of 2 longer outer cars with 2 shorter centre cars and should be roughly the size of the trains they are replacing, with the added advantages of being fully accessible and each vehicle being interconnected, which is not the case just now.   Once fully in service, these trains will eventually operate in Driverless mode, with the stations being adapted to have platform screen doors, where the screen doors line up with the train doors and open and close at the same time as the train doors.