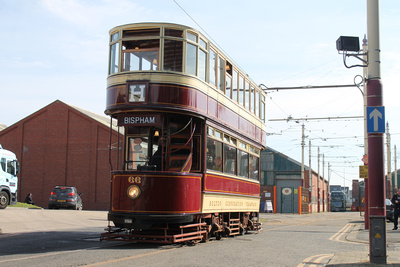 66 at Hopton RoadBolton 66 is seen on Hopton Road as it prepares to depart in the direction of the prom and then onwards to Bispham 30.4.22

Over the Bank Holiday weekend of 30th April - 2nd May, Blackpool Heritage Tram Tours held a Vintage Weekend with Heritage trams running along the prom every 15 minutes and hourly to Fleetwood. As well as the trams, there was vintage bus rides to Fleetwood and to Lytham St Annes!

I visited on Saturday 30th April and after a reasonably quiet journey down the M74, M6 and M55, I arrived at Blackpool and parked up at Pleasure Beach at 9.30am, in the reasonably warm sunshine! I walked from Pleasure Beach up to Manchester Square then round to Rigby Road depot to see the heritage trams coming off depot and going into service.

At 10.30am I joined the first of two Tramtown tours of the day and as it was a good deal drier and sunnier than my last time on the tour in February when it snowed! The tour began outside in the yard where after the safety briefing, we walked along the side of the workshops past the depot fan and round to the Paint Shop. 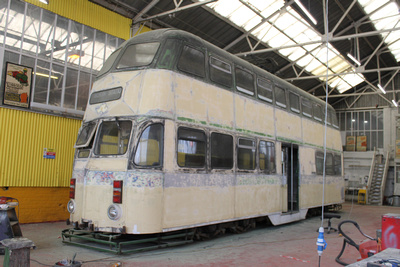 In the paint shop was Balloon 723, which has been stripped of it's Christmas vynals and had the 80s livery that was underneath the vynals sanded down ready for a repaint into an as yet undisclosed livery.   It was interesting to hear that the trams are still hand painted using brushes rather than being spray painted as the brushed on paint gives a thicker coat that lasts longer in the harsh salt and sand ladened environment of Blackpool.   We also heard how there is now only one painter, who deals with all the heritage tram fleet as well as touching up bus panels as well, the painter does a fantastic job with some stunning paint jobs on display on the heritage fleet!

The tour then moved into the Body Shop where Brush Car 634 in its new Terror Tram advert was stabled awaiting attention prior to a potential entry into service later this year, also there were the bodies of Lytham 31 and Glasgow 1016, both of which are future major restoration projects.   It was interesting to hear how both trams came to be snapped up by Heritage Tram Tours and the future plans for both trams.   One current major restoration project on the tramway is that of Balloon 704.   704 has been stripped to its basic framework awaiting the fitting of a new underframe as it's current one is life expired and drooping at the ends.  Once some repair work has been done on the current body frame, 704's frame will be transferred onto a new underframe that we will see in the next part of the tour, the fitting shop. 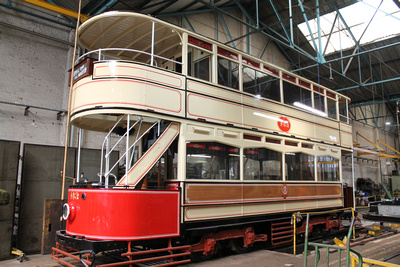 In the fitting shop, we see the large array of blacksmiths tools and the forge that alot of spare parts are made in.   Due to the age of the fleet, parts are not available off the shelf so have to be made.   One item that has been made recently from scratch is a complete replacement underframe, which will go under Balloon 704.   The underframe for 704 which was built by one engineer working from a set of plans initially drawn up 90 years ago and found in the heritage archives.  Again, this highlights the 'can do' attitude of the staff and volunteers at Heritage Tram Tours, Tram Town and Blackpool Transport.

Also in the Fitting Shop was Standard 143. Standard 143 was transferred to the Fylde Transport Trust in 2003 to restore from a fire damaged works tram back to its original condition as a 1924 built Standard Car.   As it was discovered that there was an issue with one of 143s motors following restoration, the motors from Standard 147 have been transferred to 143 to allow the tram to enter service hopefully by the summer and 147 will also be back in service once the repaired motors have returned from the company who are repairing them.

Another feature of the Fitting shop that we got to see was the gas ring that is used to remove old tyres from the tram wheels and for the fitting of new tyres. 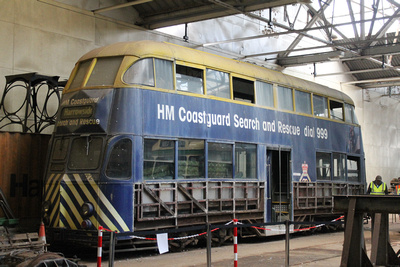 726 at Rigby Road depotA rather forlorn looking Balloon 726 with the remnants of it's HM Coastguards livery and severe droop at both ends due to it requiring a replacement underframe is seen at the rear of Rigby Road depot 30.4.22

We then crossed over to the main depot building, where it is safe to say that the roof is in a sorry state and full of holes.  Part of the reason for Tramtown being set up and the tours running is to help to raise some of the money required to replace the roof and to allow the tram fleet to be in a far more protected environment which will protect the heritage fleet from the elements.   Future plans also include the current engineering facilities in the workshops being moved over into the main depot as well as the building being used as a visitor centre for the tramway, however not of the 'stuffed and mounted' variety where every tram in it becomes a non runner.   Tramtown want the trams to be running out on the prom and also eventually to bring visitors to Tramtown by tram!

One thing you'll notice when you visit Tramtown is that there are always improvements from your last visit! In the space of 2 months, some new viewpoints have opened up within the sheds allowing you to get closer to and photograph more of the fleet, various parts of the depot have received a new coat of paint including the track numbers having been repainted on the ground on the depot fan.    Last time we got to sit onboard Bolton 66, this time we got to sit on board Coronation 660 and found out some of the interesting history of the fleet of 25 Coronation trams that were meant to revolutionise the tramway in the 1950s but had a short working life and were mostly scrapped by the 1970s. 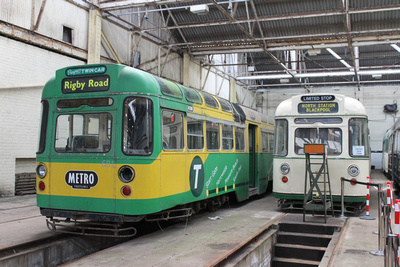 We were then taken to the first of the new viewing areas opened up where we heard some of the history of the illuminated fleet in front of the long stored Hovertram 735.  The viewing area also gave the chance for a close look at Brush cars 625 and 632 as well as Twin Car trailers 681 and T2.

The next new viewing area gave a view of Princess Alice - Open topped Balloon 706, which is awaiting a new underframe and the long stored 'Tramnik 1' the Rocket tram 732.  The final stop of the visit was to the Electrical Compound to see the Western Train and a visit to the shop, where I purchased a TramTown planter for my garden!

Before I left Tram Town, I asked our helpful guide if I could get a couple of photos of Balloons 700 and 703 and Railcoach 279, which is nearing completion of its restoration back to a series 2 EE Railcoach.

I would definately recommend a visit to TramTown for not just enthusiasts, but anyone who is interested in history! Tramtown run tours of the depot every Saturday and Monday both as a depot tour (approx. 1 hr 30 mins) or as a family tour (approx. 45 mins). Available dates and times can be found on their website: https://blackpoolheritage.com/guided-depot-tours/ 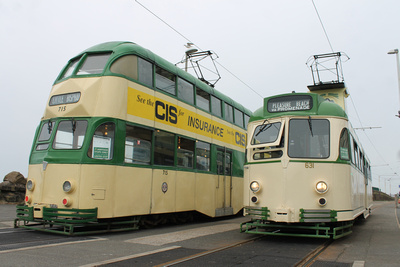 After the tour, I made my way back to the prom and caught  Centenary tram 648 to Pleasure Beach (to put my new planter in the car!).   I then caught Bolton 66 to Bispham, where I got off to take some photos!   Next I caught Balloon 715 to Little Bispham and back before switching to Boat 600 for a rather breezy run to Thornton Gate and back to Bispham!  I then caught Centenary 648 to Little Bispham then back down to Pleasure Beach, where I took some more photos then headed home!

More Photos from my trip can be found at: https://scottishtrains.zenfolio.com/p820301502