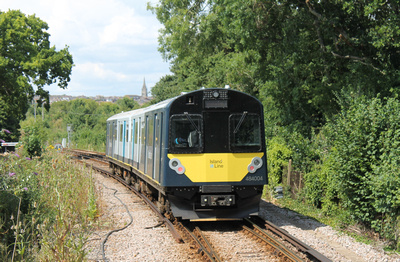 I made my first ever trip to the Isle of Wight on 26th July.  My day started with the 40 minute trip from my hotel at Eastleigh by train into Portsmouth Harbour, where I joined a long queue waiting for the Catamaran across to Ryde.   I got a good spot up on the top deck to view the Harbour and the coastline of Portsmouth and Southsea on the short 20 minute crossing.

On arrival at Ryde I headed into the Pier Head station where 484004 was waiting to form the 10.45 service to Shanklin.   484004 had just replaced 484002, which had failed on the previous service.   It was a really smooth journey and despite the number of people who got off the ferry, I wouldn't have said it was packed.

The interior of 484004 was bright, modern looking, spacious and airy.   I travelled to Lake, one stop short of the terminus, where I got off the train.

My reason for getting off one stop short of the terminus was that I was wanting to go and get some photos of 483004 at it's new home at Holliers Park in Arreton.   The bus stop was a 5 minute walk from Lake station out on the main Ryde - Ventnor Road.   From here I caught service 8, which runs half hourly to Amazon World.   The journey took about 20 minutes and once off the bus was a 5 minute walk, turning left at the crossroads and walking about 1/4 mile.   In Holliers Park, there is the House of Chilli, a craft centre and the Bus Stop Cafe, which is located in a converted bus.

483004 is currently in a fenced off section of former gravel car park, however the owner of the cafe kindly gave me permission to go in and have a look round and take some photos of the exterior.   483004 is looking excellent in its coat of London Transport Red with white roof.   The visible side of the train has been fully painted, however the side that isn't visible is still mostly in the grey primer.   The staff who are working on 483004 are really making an excellent job in restoring 483004, which is destined to become a cafe in the future.   Before I left, I had a nice lunch at the Bus Stop Cafe, which I'd definately recommend and it cost less than £10.

I headed back towards the Island Line on bus service 8, however after mistakingly thinking that the service stopped at Sandown train station, where as it actually stopped on the front, I had a 15 minute walk up to the station, which meant that I'd just missed the train to Smallbrook Junction by 5 minutes and had almost an hours wait on the next one.  Whilst I was waiting, 484003 passed through heading to Shankin on a driver training run and then returned a short time later heading in the direction of Ryde.   As it was roasting by this point, I crossed over and decided to catch 484004 up to Shanklin, then from Shankin down to Smallbrook Junction.

At Smallbrook Junction, I got off and transferred over to the Isle of Wight Steam Railway.  After a 10 minute wait, Hunslet Austerity 0-6-0 ST WD198 'Royal Engineer'  arrived with a trainload of vintage Southern carriages for the journey to Wooton.

On the outbound journey, the train does not stop at Havenstreet so it is a straight end-to-end journey.   After running round at Wooton, 198 led the train back to Havenstreet for a 10 minute stopover awaiting the passage of the other train on the line led by LMS Ivatt Class 2 41298.

Unfortunately due to missing the previous Island Line train and 198 being the final train of the day to Smallbrook Junction, I literally had 10 minutes to look round at Havenstreet, which included a very quick sprint up to 'Train Story' for a few shots of 483007.   I just made it back to the platform in time for the train back to Smallbrook Junction.

By the time I reached there, the half hourly peak service had started, so I caught 484003, which was operating as the extra unit between Shanklin and Ryde Esplanade as far as Ryde St Johns, where I got a couple of photos of 484001 and 484002 stabled in the yard and 484003 on it's return journey to Shanklin.

I then caught 484004 from Ryde St Johns to Ryde Esplanade, where I got the classic shot of 004 heading along the pier.   I then had a wander round the town before photoing the hovercrafts arriving, some buses and the 484003 arriving at Ryde Esplanade, then departing again via the tunnel.   After grabbing a quick bite to eat, I walked along the Pier, catching some photos of 484004 heading to the Pier Head. I then ran up to the Pier Head for the Catamaran back to Portsmouth then back to the hotel.

Photos from my trip can be found at https://scottishtrains.zenfolio.com/p37224282

My History of the Island Line Blog can be found via the following links: