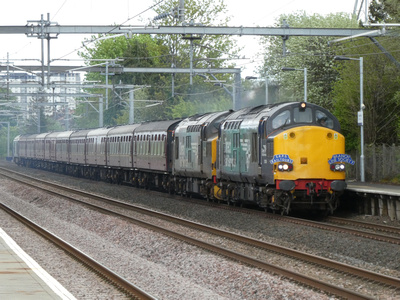 The Branch Line Society operated a railtour from Crewe to Gourock and return on Saturday 27th April. The 'Gourock Growler' operated with DRS locomotives throughout and the SRPS railtour Mark 1's.

On Friday 26th, 66425 worked light engine from Carlisle Kingmoor - Bo'ness to collect the railtour set, heading south, the tour worked as 1Z85 and was worked as the 'Bo'ness Bonus' railtour to Crewe. The route taken to Crewe included heading to Edinburgh Waverley then via the Shotts Line to Holytown, then via Motherwell and the West Coast Main Line.

On to Saturday and the main event. The tour left Crewe led by 88007+88002 and was top and tailed with 68018 on the rear, however due to multiple working issues between the pair of 88's, 88007 was removed at Carlisle leaving 88002 to lead to Mossend Up Yard. The tour was running late, therefore missed out many of the loops that it was due to pass through on the way up the West Coast Main Line until it reached Carstairs, where it was held in the Down Passing Loop for 8 minutes to allow 390122 to pass it.  It then proceeded to Mossend Up Yard, where it arrived 28 minutes late. It was here that there was a change of traction, with 88002 being removed and 37038+37218 being added for the trip out to Gourock.

37038+37218 with 68018 on the rear of the train then departed Mossend Up Yard 28 minutes late heading to Whifflet South Junction then on the rarely used single track to Sunnyside junction, where the tour headed along the North Clyde Line as far as Anniesland before taking the Maryhill line to Springburn. After Springburn, the tour headed back onto the North Clyde Line at Bellgrove  before taking the City of Glasgow Union Line to Shields Junction. The tour then headed towards Paisley Gilmour Street, where it took the Inverclyde line out to Gourock.

After a break at Gourock, 68018 led for the journey back towards Glasgow where the tour stopped at Polmadie Clydesdale Loop. It then reversed with 37038 and 37218 leading once more, it headed back towards Paisley Gilmour Street where this time it headed along the Ayrshire line via Kilwinning then at Newton on Ayr junction it headed along the single track, which would join the GSW line near Mauchline and would continue south to Carlisle. At Carlisle, the 37's were removed and 88009 was added to the front for the remainder of the journey to Crewe.

On Sunday, the final day of the tour, 66305 brought the SPRS stock back north as 1Z66 Crewe - Polmont 'The Sunday Shed' tour. After it arrived at Polmont, 66305 returned the stock to Bo'ness before heading back to Carlisle Kingmoor Light Engine.