During the COP 26 Climate Summit, the eyes of the world were on Glasgow and it was seen as a chance to show off some advances in some more eco friendly advances in rail technology such as hydrogen and battery power to a wider audience, including Royalty and heads of Government. 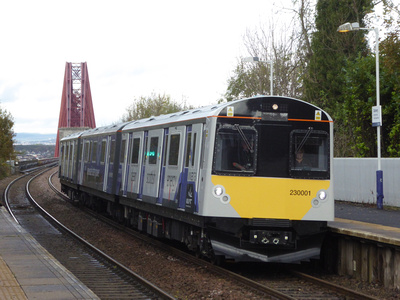 The Grey, purple and black with Vivarail “Clean Energy/Fast Charge” slogans liveried 230001 arrived at Polmadie by low loader on 24th October and began test and press runs between Glasgow Central and Barrhead / Kilmarnock from 27th October to 29th October.   The unit did manage a trip further afield with a trip from Polmadie - Inverkeithing Yard on Friday 29th October and a return trip over the Forth Bridge back to Polmadie, which doubled as a Press run, following a naming ceremony, where 230001 was named 'Viva Venturer'.   On weekdays during the COP 26 conference, 230001 would make the short journey into Central Station from Polmadie and would operate between Glasgow and Barrhead either 2 or 3 times per afternoon.   During the course of the conference, both Prince Charles and Prime Minister, Boris Johnson were amongst the visiting dignatories to have a look on board. 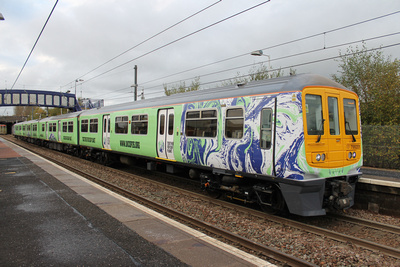 799201 is the second of two tri-mode multiple units adapted from class 319 EMUs (799001 was adapted from 319001 and 799201 was adapted from 319382). The existing 25KV overhead line and 750V Third rail equipment has been retained with both units featuring a full carriage sized hydrogen fuel cell.   Porterbrook hope to eventually be able to make the fuel cell to fit in the underframe of the units.

The project evolved and a second unit was required so 319382 became 799201 for showcasing at COP 26.   799201 features a Green livery with COP26 branding and earth vynals around the cab sides.   One of 799201's Driving Trailers contains the hydrogen cells, while vehicle 71980 was fitted out with a boardroom styled interior for the COP26 Summit.

799201, consisting of vehicles  77975, 63094, 71980 and 77976 was hauled from Long Marston, where it is based to Mossend on 3rd November 2021 by 57312 and made it's debut run on 4th November, traveling from Mossend to Glasgow Central and travelling 2-3 journeys non stop around the Cathcart Circle (via the outer track) before returning to Mossend, 799201 ran on electric power for the duration of the summit.   799201 made daily runs on weekdays up to 11th November, with the unit returning south on 12th November.   Over the course of the conference, both Prince Charles and Prime Minister, Boris Johnson were amongst the many visiting dignatories to have a look on board. 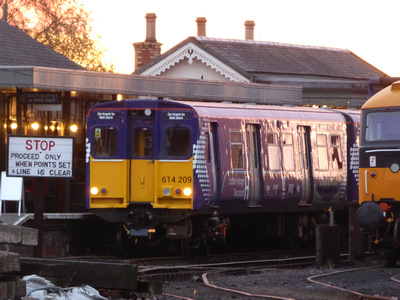 The third and final unit, 614209 (vehicles 64599, 71458 and 64600), was still being worked on at Bo'ness during COP 26, however a series of visits was set up by Arcola Energy to showcase the progress made on the former class 314 unit during its conversion from an EMU to hydrogen power.

314209 was withdrawn from service on Friday 13th December, a day before the final withdrawal of the class 314 fleet, having worked on evening peak Neilston services with 314210 and was probably the unit which was in the best condition compared to the then remaining 314 fleet.   Despite the scrapping of the other units, 314209 remained stored at Yoker for almost, until it was transferred under it's own power from Yoker to Shields depot on 16th December 2020 for onward transport by low loader to Bo'ness over 17th and 18th December 2020.

Work started on the conversion of the 314 to Hydrogen power in January 2021 and has involved the removal of most of the original electrical equipment from the 314 either for refurbishment or for replacement. New equipment fitted has included AC motors (314209's original motors were DC), a new system of batteries to allow it to run off battery power if required and hydrogen tanks fitted below the underframe.   The interior of the unit is also being refurbished with the old seating having been removed and replaced with Pendolino style seating and new flooring.   The original wall panels and lighting has been maintained.   The Pantograph trailer has been completed, however work is still ongoing on the DMSO vehicles.