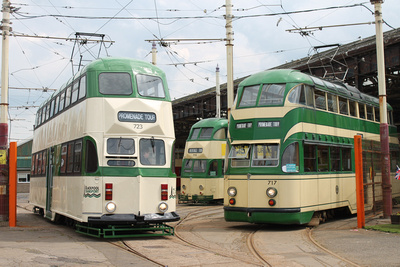 On Thursday 2nd June, I headed down to Blackpool for the day to see the Jubilee Heritage Tram Parade.

I arrived in Blackpool around 11.30am and it was already very busy and my usual car park of choice at Pleasure Beach was already full, however I managed to get parked outside the Solaris Centre at Harrowside.  I walked up the prom to Manchester Square and round to Rigby Road depot where the trams for the parade were beginning to be shunted round and sorted into order before heading out to the Prom and down to Pleasure Beach for the parade.

The first tram out was red and cream liveried Boat car 227, which was to lead the parade, it was stabled on Hopton road, whilst Balloon 723 was shunted down to the far end of the depot fan and 717 was shunted onto the Electrical compound track to release Boat 600 to move off depot to be stabled on Hopton Road behind Boat 600.   Next out was Brush Car 631, which was moved out onto Hopton Road and parked up behind 227 and 600.   The fourth tram to leave depot was a nice surprise in 90s Green and Cream liveried Ex Towing Railcoach 680, which was making its first appearance since March 2020 (pre lockdown).

After the trams were checked over by their crews, 227 and 600 departed Hopton Road, turned on to Lytham Road and onto the prom. After being reversed at Foxhall, they made their way to Pleasure Beach for the parade.   Once 227 and 600 were clear of Lytham Road, 631 and 680 followed suit.

Next the Frigate 'HMS Blackpool' 736 was brought out on to Hopton Road to reverse onto Blundell Street where it stabled alongside the Fitting Shop wall.  Balloon 723, freshly out the Paint Shop in the modernised balloon version of the 90s Green and Cream with black window surrounds, was then shunted out onto Hopton Road and then shunted back into one of the depot roads to release Fisherman's Friend trawler 737. 737 was also shunted out onto Hopton Road and reversed onto Blundell Street in front of 736.    80s Green and Cream liveried Centenary car 648 was then brought out and headed straight to the prom to take up position 5 in the parade.   648 was followed by the Western Train (733+734), which came out with the carriage leading so that it was facing the correct way once it changed ends at Foxhall.

Once the Western Train was clear of Hopton Road, the trawler (737) was turned on the triangle so it was heading out in reverse, with 736 completing the same move with both trams then departing towards the prom.   One final shunt move saw Balloon 717 moved off the electrical compound track and onto Hopton Road before being moved further back the depot fan to release Bolton 66.   Balloon 717 would then be the next tram to depart towards the prom followed by Balloon 723, Balloon 700 and Millenium Balloon 707. 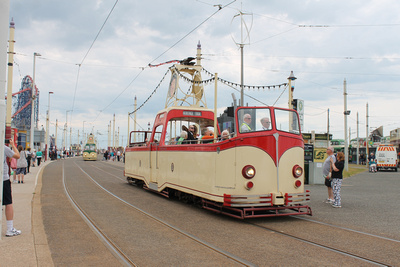 I then walked down to Pleasure Beach where the loop was choc-a-block with heritage trams, passengers, sightseers and enthusiasts!   After a few photos on the loop, I took up position near the entrance to the loop and photoed the parade, which featured 13 trams.   These were:

Once the parade departed, I walked up towards Manchester Square to see the trams returning, with all bar Boat 227, Boat 600, Bolton 66 and Balloon 717 returning to depot.   Rather than running straight in, The Western Train ran to Pleasure Beach and back to Foxhall where it reversed in. 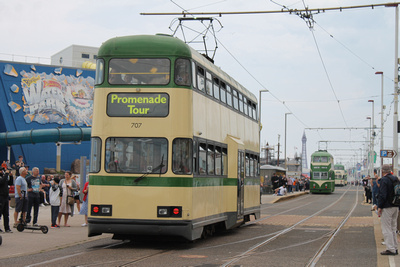 Well done to everyone at Blackpool Transport, Heritage Tram Tours and Tramtown for organising such an excellent event!

More photos from the day can be found at: https://scottishtrains.zenfolio.com/p50243848